Total raised for
all candidates*

*Total includes $16,228 that was raised for operating costs to assist our Virginia candidates with GOTV efforts.

Our teams and affiliates spent at least 31,343 volunteer hours supporting our candidates in the field. The following are estimates based on a conservative average efficiency:

Field and fundraising efforts largely went to the areas where they could have the biggest impact.

Of fundraising went to women candidates

Of fundraising went to candidates of color

Of fundraising was for races decided by less than 10%

Of fundraising was for races decided by less than 5%

Of canvassing was for races decided by less than 5%

Of phonebanking was for races decided by less than 5%

In addition to supporting their Sister Races, our teams and affiliates also used their teams as hubs for other civic engagement and electoral activities. Overall, in 2019 our teams and affiliates raised over $800,000 (including $79,100 from unofficial SDP races) and made over 700,000 voter contact attempts in the field for Democratic candidates and causes.

In 2019, we supported fewer Sister Races than in 2018, due to the odd-year election cycle. As the chart below indicates, our average per-candidate level of support generally increased significantly in 2019 over 2018. 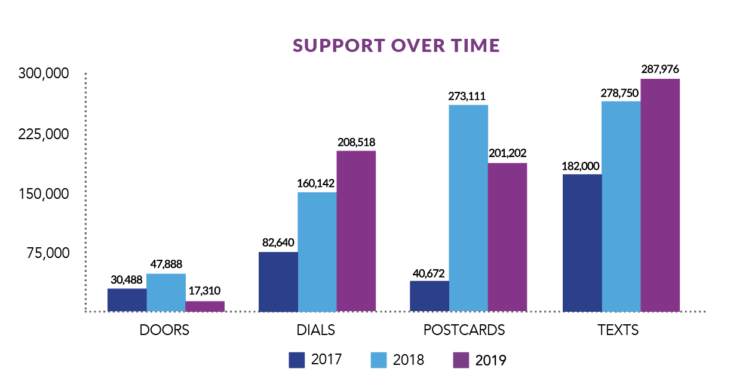 We significantly increased our impact per candidate across almost all of our field activities in 2019 over 2018. 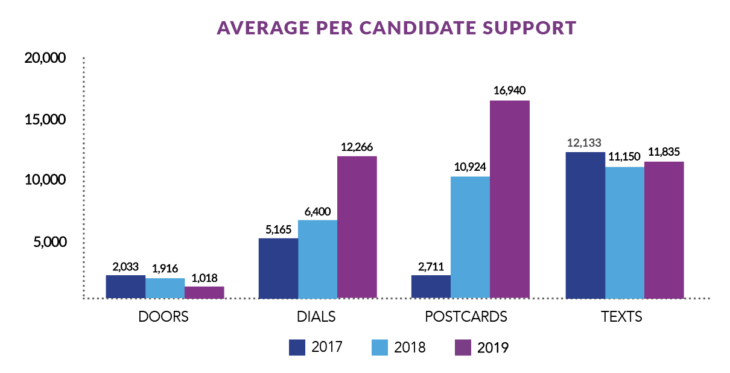 Compared to 2018, which was a high-profile midterm election, Sister District had similar fundraising performance in 2019, demonstrating the strength of our programs even in odd, lower-profile years. Importantly, we saw an increase of 42.53% in the average fundraising per candidate from 2018.

The table below shows the overall lifetime field and fundraising performance for Sister Races:

Our 2019 slate was diverse in terms of types of candidates and geography.

We supported some incredibly competitive races in a historically high turnout election cycle: 52.94% of our candidates and 100% of our alums won their races.

Wins/losses are not our only metric of success. Closing the gap between Democratic and Republican performance, and competing in places where Democrats have not historically run, are also critical indices of programmatic success. Importantly, most of our 2019 races were decided by less than 5%, and in 88% of our races, our candidate outperformed the last Democrat to run for the seat.

Many of our 2019 races were incredibly close. Every vote counts.
Here is a small selection:

We requested feedback from our endorsed campaigns and found that candidates and their staffs were highly satisfied by the support SDP staff and volunteers provided. Importantly, campaign satisfaction with SDP volunteers increased this year, as did the value of SDP’s fundraising and field support compared to other national organizations.

Note: 19 people representing 13 campaigns responded. All responses for the same campaign were averaged into a single composite score for that campaign for a total of 13 scores. Answers were translated to a 10-point scale. Only full Sister Race campaigns were surveyed.

“Sister District is the classic win-win situation where people in Blue states can help make a difference flipping districts across the country.  The network and format is all there, all you need to do is join and bring your enthusiasm for change.

My path to victory has been arduous, but Sister District has been by my side through it all.  They helped me leverage my experience to remind people that every vote counts so we can motivate voters and volunteers to demand change on election day.  Together we are rewriting the ending to our tied election story with something uplifting that says ‘if we persist, we will make change happen together.’”

“When we win this seat and flip control of the Virginia state house, Sister District will have played an outsized role. You have provided fundraising and grassroots support to down ballot races that oftentimes struggle to find resources.”

“Sister District was a terrific help to our campaign throughout the cycle. They provided many valued resources including donations and time to help communicate with voters in the 85th. Sister District is an amazing organization and I look forward to working with them in the future.”

“We were so grateful to be endorsed, and really appreciate everything you’ve done for us. This race has been a toss-up… and Sister District volunteer help and financial support has been enormous, plus a really great morale boost in general. Thank you!!!”

“It was wonderful to interact with engaged volunteers and supporters outside of Virginia; knowing that so many others were investing time and energy in this campaign was hugely motivating.”

“SDP always only commits to what they know they can do (and usually exceed). Far too often in politics, outside groups bite off more than they can chew, which leaves campaigns in a lurch trying to fill a void.  SDP never creates a void and always fills voids.”

“Sister District understands campaign operations and day-to-day what is going on. They provide an incredibly helpful value-add to any campaign and are responsive to the needs of each campaign. Their staff and volunteers are professional and highly effective.”

“Sister District provided me with invaluable support throughout my campaign. Their commitment to my race, on a daily basis, helped push me toward the finish line in an organized and strategic way.  I will always be thankful and appreciative for the support of SD and their team of volunteers and donors, but, more so, for their willingness to invest in Democrats fighting in Mississippi.”

Using feedback from campaigns in prior cycles, Sister District hired a Head of Campaigns in 2019 to provide expert strategic advice and assistance to campaigns that could not afford large staffs. The Head of Campaigns offered a wide array of strategic support across virtually every aspect of participating campaigns. This included crafting a full library of campaign planning tools, holding weekly strategy calls, providing political landscape analysis, writing detailed field and GOTV plans, and advising on campaign communications strategy, among many other services. 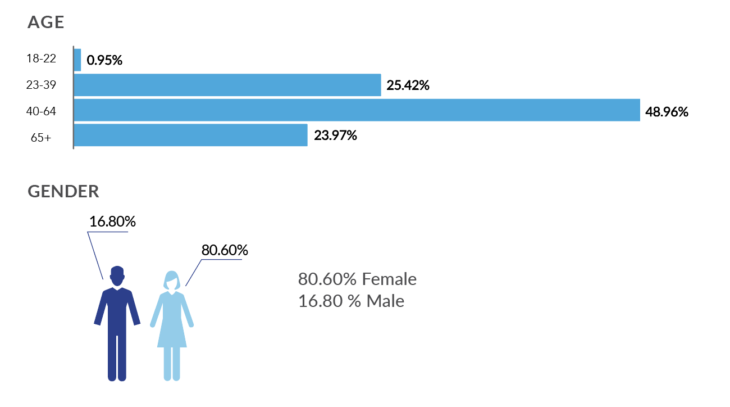 *Note: Demographic statistics come from a TargetSmart list match as of 11/4/19 where 22,039 contacts matched. (The remaining contacts did not match for various reasons.)

Our email list includes volunteers from all 50 states, as well as Washington, D.C. The states with the most volunteers are:

We conducted a feedback survey with our volunteer leaders to gauge enthusiasm and morale among our teams and affiliates. We found that most teams and affiliates are highly satisfied with their candidates and contributions to our mission. Importantly, average ratings improved in every category when compared to the same average responses from 2018.

Note: Items were translated to a 10-point scale. 45 Volunteer Leaders representing 43 teams and affiliates responded to the survey.

In response to previous volunteer feedback, Sister District hired an Organizing Manager to work together with our Head of Organizing to provide critical additional support to volunteer teams. The Organizing Department dedicated substantial resources to strengthening teams’ infrastructure through tactics such as providing individualized leadership coaching, developing custom plans for team improvement, expanding availability of training materials, and offering hands-on event and team-building assistance. While no questions in our survey directly evaluated satisfaction with the Head of Organizing or Organizing Manager, volunteers reported a high level of satisfaction with Sister District staff, rating the support they received from staff 9.0/10.

While SDAN runs several programs, including its popular Book Club + Fireside Chat series, SDAN’s flagship program is its voter and volunteer research program. We conduct academic-quality experiments and analyses to develop and disseminate best practices in the areas of voter and volunteer engagement.

In 2019, SDAN’s research program took off like a rocket. We conducted 28%
more studies in 2019 than 2018, and reported on 700% more studies in 2019 than 2018. Our research is adding significant value in the areas of voter and volunteer engagement.  In December, we were thrilled that our SDAN work was given an Expy Award by the Analyst Institute, the country’s premier progressive research organization.

Download the PDF: 2019 Impact Report
or
Read the In-Depth Analysis