This week, we’re kicking off the 2022 midterms by announcing our first 6 candidates of the year. They are running in 4 different states, all critical to Democratic success in the midterms, and vital in protecting the health of our democracy: Arizona, Michigan, Pennsylvania, and North Carolina.

Getting progressives elected to state legislative seats is part of our core mission at Sister District, and each of these states is a critical part of our overall strategy to build enduring progressive power at the state level. Read more about why Arizona, Michigan, Pennsylvania, and North Carolina are important states for the 2022 midterms here! 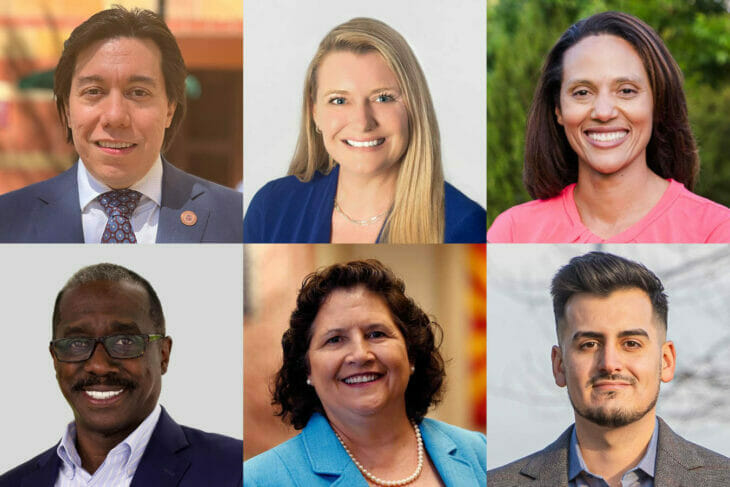 Sydney Batch is a lawyer, social worker, and child welfare advocate who was raised in North Carolina. Sydney received her undergraduate degree at the University of North Carolina at Chapel Hill, where she remained for her Juris Doctorate and Masters of Social Work. Following law school, Sydney entered private practice with her husband, J. Patrick Williams. She is the founding partner at the law firm, Batch, Poore & Williams, PC.  Her practice primarily focuses on family law, child welfare law, and appellate work. She lives in Holly Springs with her husband and two sons. In her free time, she enjoys quilting, traveling, and spending time with her husband and children.

In 2018, Sydney was elected to the NC House of Representatives, beating the Republican incumbent. She represented House District 37, which encompasses southern Wake County, serving on committees such as Judiciary, Finance, Elections Law, and Ethics, and State and Local Government. In 2020, Batch narrowly missed reelection to the House by a margin of ~3% but was appointed by the Governor to fill an unexpected Senate vacancy in January 2021. As the current Senator for District 17, she serves on the following committees: Appropriations on Education/Higher Education, Commerce and Insurance, Pensions and Retirement and Aging, Legislative Ethics, and the Joint Legislative Committee on Local Government.

As a legislator, Sydney believes that policy and evidence-based research should inform and guide the legislation passed in the North Carolina General Assembly. Since being elected to office, she has advocated for paid family leave, Medicaid expansion, the expansion of early childhood education, and mental health reform. This is exemplified through her legislative record and the more than 100 bills she has sponsored throughout her tenure as a public servant, with a particular focus on child welfare, public safety, and support for families and small businesses.

In November 2018, Pastor Dan Williams, a well-known and respected community leader ran for public office for the first time. He won 61% of the votes to flip the district blue, becoming the state representative for the 74th Legislative District in Pennsylvania.

His victory can be attributed to his commitment to the community. A Chester County resident for over 30 years, Dan treats his neighbors like his family. His loving wife of nearly 40 years (Baleria Alston Williams), three children, and one grandson can attest that “Dan is a trusted leader we can depend on.”

As a former UPS supervisor and Teamster, Dan knows the importance of unions to ensure a living wage, access to affordable healthcare, and proper protection on the job. For the past 30 years, he’s been the devoted Senior Pastor of New Life in Christ Fellowship Church in Coatesville. During this time, he has envisioned, led, and sponsored several missionary trips both domestically and abroad to Europe, Haiti, and Africa.

His continued, long-term engagement with the community not only makes him an accessible public servant to his constituents, but also provides a deep understanding of what children, working adults, and seniors need to thrive throughout the 74th district.

Melissa “Missy” Cerrato is no career politician. She’s a dedicated public servant and a working mom who knows what it means to serve our community. Now, she’s running to be the State Representative for House District 151, to ensure Harrisburg is working on the issues that matter to us.

As a Pennsylvania native, Missy grew up in the Philadelphia suburbs and has raised her own family in Horsham for the last decade. Her husband, John, is a member of the UA Local 420, and their daughters go to our public schools. She is invested and highly involved in our community, including assisting and organizing for charities like Catholic Charities Outreach, The Mitzvah Circle, and multiple holiday toy drives.

Since 2018, she has served under State Representative Liz Hanbidge, working directly to better the lives of our neighbors, seniors, and veterans. As District Director, her job is to get results for the community when no one else can. From helping to put millions of dollars in unclaimed funds back in our pockets, to fighting to end a months-long backlog and get Pennsylvanians long-awaited unemployment assistance, Missy’s proactive, solution-oriented approach means people get the help they need.

Mitzi Epstein is a problem-solver who has spent decades contributing to our community. As our current State Representative and a former Kyrene School Board member, she has listened to the needs of our community and taken action to get things done.

Mitzi excelled at a tech career in the manufacturing and finance industries and is also a small business owner.  Her business skills in teamwork, planning, and evaluating projects have been instrumental to creating success in her volunteer positions as a statewide PTA leader, a youth soccer coach, and founder of state and local groups that bring together parents, business, and school officials as advocates for children.

Mitzi Epstein’s work over the last 25 years is a testament to her commitment to strong schools, continued economic development, and ongoing community improvement. She and her husband Rick have been married for over 35 years and raised two boys who are now adults pursuing careers of their own. Representative Epstein is deeply invested in the success of her community, and the state of Arizona as a whole. That’s why Mitzi is running for state Senate in Legislative District 12, where she will continue to fight for our schools, our workers, our businesses, and fiscal responsibility.

Brian Fernandez is the current Representative in LD4 and is running for the Senate seat in the newly redistricted LD23. He was appointed to the seat after incumbent Representative Charlene Fernandez resigned from the seat.  Fernandez is a native of Yuma and went to Arizona State University. Prior to joining the legislature, his professional background is in software engineering and he has volunteered for several political campaigns, including those of former Governor Janet Napolitano, Congressmen Ruben Gallego, and Ed Pastor.

State Representative Darrin Camilleri is serving in his third term representing the 23rd House District, which includes the Downriver communities of Gibraltar, Grosse Ile, Huron, Trenton, Woodhaven, and Brownstown. During his time in the State legislature, Rep. Camilleri has served as the minority vice chair of the House Education Committee, emerging as a statewide voice on improving our public schools and a champion for workers’ rights. Darrin is now running to represent District 4 in the State Senate, which includes all or part of Grosse Ile, Southgate, Brownstown, Flat Rock, Romulus, and Bellville.

Darrin is proud of his family’s uniquely American story. As the son of an immigrant from Malta and a Latina, in 2016 he became Michigan’s youngest Latino and first-ever Maltese-American elected to the Legislature. Coming from a long line of union auto workers, he has been steadfast in his pursuit of opportunity for all communities in Michigan.

A first-generation college graduate, Rep. Camilleri earned his bachelor’s degree from Kalamazoo College. During his time there, he served as student body president and worked for Congressman John Dingell. Having previously worked as a high school social studies teacher in Southwest Detroit, and a new homeowner in Trenton, Camilleri is committed to the success of our state through the continued support of our communities, our schools, and our workers.

From voting rights to abortion access, Republican-controlled legislatures are aggressively pursuing a future where they can enact harmful and regressive policies. And, with Democrats in control of the federal level, it’s clear that the GOP is energized and laser-focused on winning back seats wherever they can.

We have the opportunity for 2022 to be a banner year for American democracy, up and down the ticket, from coast to coast. But we will only win if we work together to organize smartly, welcome new voters into the electoral process, and execute strong voter turnout programs.

We’ll be announcing even more candidates in more states later this summer, once primaries are concluded. Stay tuned for more inspiring state legislative candidates to support this June!