Abstract: SDAN ran this experiment in the 2020 primary elections to test whether sending GOTV (Get Out the Vote) postcards meant to educate voters about the two primary system in their states would help to turn out voters for both primaries. Voters in three states that hold separate presidential and state primaries were randomly assigned to receive either no postcard, or two postcards reminding them about the primaries and providing information about how to vote. It was found that voters who received postcards were significantly more likely to vote in both primary elections (ps = 0.010) than people who did not receive postcards. This, combined with previous postcarding results, indicates that postcarding during primary elections may be especially useful.

Objective: This study sought to determine if voter turnout among low-to-mid turnout propensity, high support voters could be improved by sending a GOTV/voter education postcard to voters ahead of each of the 2020 state and presidential primaries in Florida, Georgia, and Minnesota.

Background: Recent industry research suggests that sporadic voters are being somewhat ignored by political operatives. This lack of engagement may, in turn, keep fueling these voters’ low chances of voter turnout. Further, a dearth of communication may leave these voters uneducated about important aspects of the electoral system in their state, including the fact that, in many states, separate primaries are held on different dates to nominate presidential candidates and candidates running for all other state and federal offices. Candidates running in the state primary, usually held at least a couple of months after the Presidential primary, tend to see lower voter turnout than candidates running for President, and both primary elections see lower voter turnout than the general election. For this reason, it is important to turn out as many voters as possible for both primary elections. Sending voter education/GOTV postcards may help to educate voters about the existence of the two primary system in their state (as well as the information they need to vote), and mobilize voters to the polls.

Specifics:  SDAN pulled a list of all registered voters who fit inclusion criteria (have a partisanship score of 80-100, indicating high support for Democrats, and a mid to low non-Presidential primary election voter turnout propensity scores of 25-60) in several state legislative districts in Florida, Georgia, and Minnesota. We randomly selected 10,000 voters from each state’s list, and randomized each state’s list into the 2 conditions: control or postcard. This resulted in a sample size of 30,000.

We recruited Sister District volunteers to write the GOTV postcards and mail them to an in-state partner approximately two weeks before each primary election. In-state partners put postcards in the mail for local mailing 3-5 days after the volunteer mailing deadline. It is assumed that voters in this study received postcards approximately a week before the election encouraging them to vote. SDAN then reviewed the voter file to determine if voters in the sample voted in either or both of the primary elections held in their state. Due to the Coronavirus pandemic, the presidential primary in Georgia was cancelled and Georgia held only 1 primary, and thus they were removed from this analysis.

Handwritten postcards were effective in increasing voter turnout in Florida and Minnesota.

The cost of this tactic was relatively cheap, coming in at $31-$32 a vote. 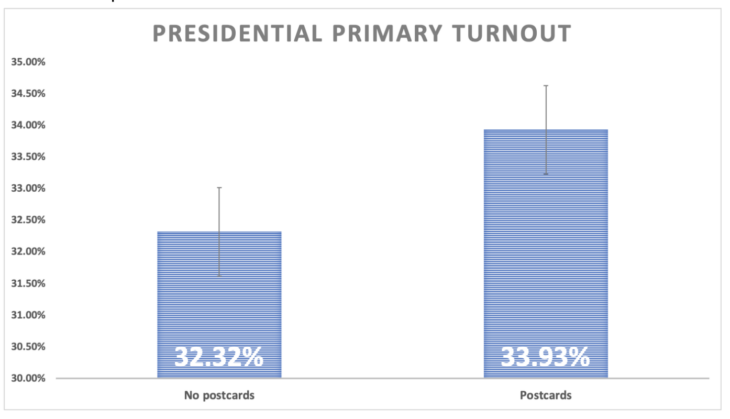 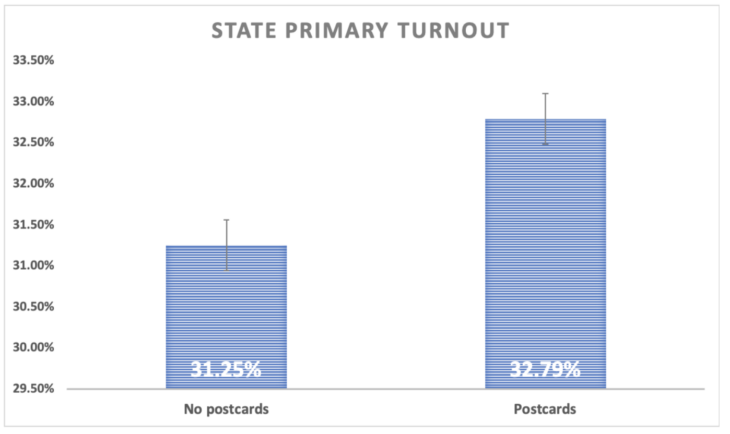 The cost per vote for this tactic is quite good compared to many other tactics.

Focused on a unique set of voters.

This study was statistically underpowered.

This study builds on SDAN’s 2020 postcard postmark study to compile more information about primary postcarding. Both studies indicate that postcarding during the primaries is promising, with fairly large effects in both studies. This indicates that more studies focusing on postcarding in primary and special (i.e., quieter) elections should be conducted.

Future research should focus on replication and expanding to different election types, perhaps including municipal elections. Further, these postcards focused on GOTV and voter education, but this method could also be tested for persuasion or for appeals on the issues. More research is needed to determine the best practices for primary postcarding, but the current research indicates it is a promising avenue,

If you’re interested in reading more about this study, a longer report is here: Two Primaries Short Report