Objective: This analysis explores the general election voting behavior of voters who SDAN sent GOTV postcards to ahead of the 2020 primaries, to determine if the increase in voter turnout we observed in those studies traveled downstream to increase turnout among those voters in the November 2020 general election.

Background: SDAN ran two postcarding studies during the 2020 primaries. In the postcard postmark study, participants were sent one postcard ahead of the primary election in North Carolina and Texas, with the postmark on the card either from in- or out-of-state. In the two primaries study, participants were sent one postcard ahead of each of the two primary elections in Florida and Minnesota (voters in Georgia also received primary postcards but these data were removed from the analysis due to pandemic election issues in Georgia). Both studies found that postcards provided a significant boost to primary voter turnout, in the range of 1.25-2.17%. This analysis seeks to determine if this primary GOTV tactic continued to influence voters through the general election months later.

Postcard postmark – The sample included randomly chosen voters from competitive state legislative districts in Texas and North Carolina who were considered Democratic base voters (partisanship scores of 80+) but low-mid voter turnout propensity (25-60). After pulling all voters who fit this criteria, we randomly selected 15,000 voters from each state’s list, and randomized them into the 3 conditions: control (no postcard), in-state postmark, and out of state postmark. This resulted in a sample size of 30,000. Sister District volunteers wrote the GOTV postcards and mailed them either to an in-state partner two weeks before the election (February 18, 2020) or mailed them from their own state (all writers for the out-of-state condition lived outside of the target voter’s state) a couple days later (February 20, 2020). It is assumed that targets received postcards from approximately February 24-26, 2020. See original study blog for more details.

Two primaries – This study enrolled voters from competitive state legislative districts in Florida and Minnesota who were considered Democratic base voters (partisanship scores of 80+) but low-mid voter turnout propensity for primary elections (25-60). After pulling all voters who fit this criteria, we randomly selected 10,000 voters from each state’s list, and randomized each state’s list into the 2 conditions: control (no postcards) or postcards. This resulted in a sample size of 19,999. We recruited Sister District volunteers to write the GOTV postcards and mail them to an in-state partner approximately two weeks before each primary election (Florida on March 3, 2020 and August 4, 2020; Minnesota on February 18, 2020 and July 28, 2020). It is assumed that targets received postcards approximately a week before the election. See original study blog for more details. 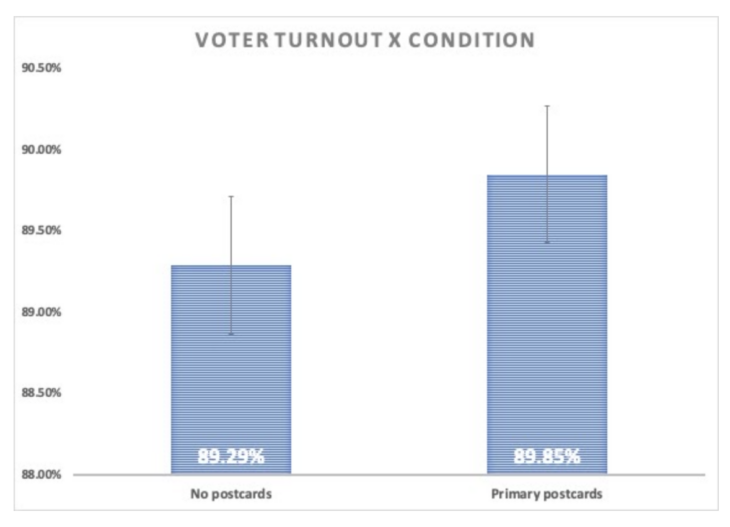 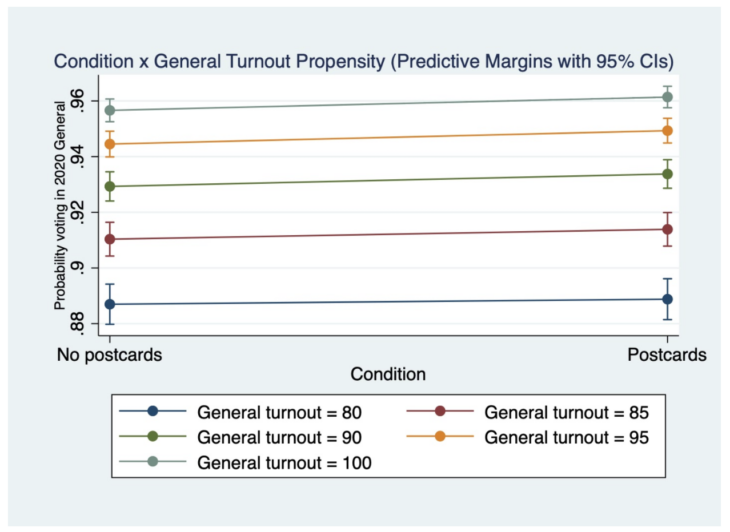 This analysis adds to the growing literature SDAN has produced on the efficacy of postcards. In the case of the postcard postmark study, there was no lasting effect. But in the case of the two primaries study, there appears to have been a lasting effect, that, though not significant in the entire sample, demonstrates how influential voter contact can be. Additionally, a statistically significant interaction revealed that the primary GOTV postcard tactic did boost general election turnout downstream among voters who were highly likely to vote, but did not boost turnout among voters who were unlikely to vote. This is a useful finding, because it suggests that this tactic should be used among some voters (high turnout) but perhaps not others.

Further, these analyses also demonstrate the cost effectiveness of postcarding during the primaries, as any downstream effects on voting would be considered a bonus.

The results of these studies continue to suggest that there are no real downsides and some possible real upsides to primary postcarding for people above 80 in modelled general election turnout scores. It may present more challenges for a lower turnout general election population (45 and lower), at least for downstream general election effects. More downstream analyses of primary tactics should be conducted in order to determine where these effects fall within the context of all voter tactics.