Menu
December 15, 2022
Postcards to voters: How much handwriting matters?

This study was a randomized controlled trial (RCT) designed by SDAN. The study targeted a randomly chosen subset of 60,000 registered Arizona voters who met the inclusion criteria: 1) ‘Biden surge’ voters (people who voted in the 2020 general election but did not vote in the 2016 general election, and may or may not have voted in the 2018 general election); 2) modeled support scores of  70+ on pro-choice; 3) 80+ scores on partisanship; 4) old enough to have been eligible to vote in 2016. Of the voters who met criteria, 30,000 voters were enrolled in the control condition and 15,000 voters were enrolled in each of the two postcard treatment conditions.

In the control condition, targets received no communication. In the postcard conditions, targets received a postcard with the same image, script, and highlighting/marks of emphasis. In the completely handwritten condition, all elements of the postcard were handwritten. In the partially handwritten condition, only the address, the greeting, and the volunteer name were handwritten, but the main message was printed. Postcards were delivered to homes from approximately July 20-22, 2022. After the election, the study data was matched back to the TargetSmart voter file to determine if targets voted in the August 2, 2022 primary election. 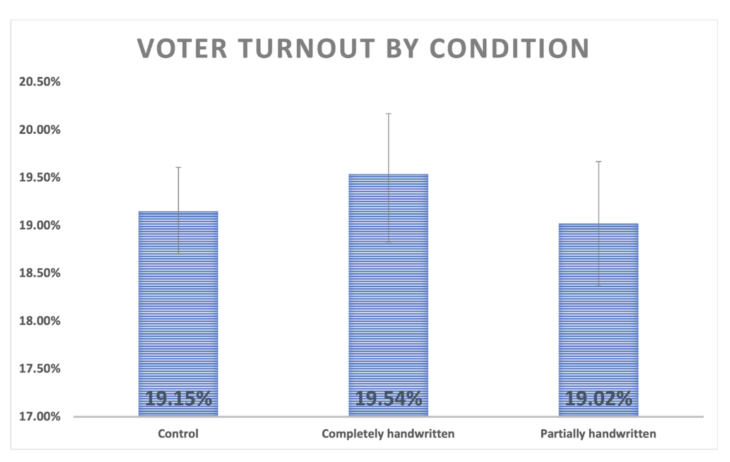 The efficacy of the postcards was not affected by the targets’ predicted likelihood of voting in the general election. 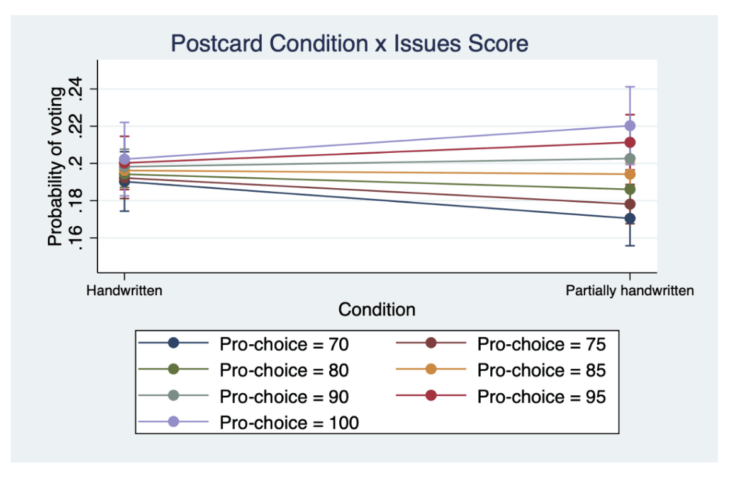 A longer report can be found here if you are interested in learning more about this study.

SDAN’s commitment: It is SDAN’s intention to provide as much context as possible to allow for the nuanced interpretation of our data. SDAN’s convention is to contextualize effects by reporting p values, confidence intervals, and effect sizes for all models tested (these items may be in the longer report linked in the blog). Additionally, SDAN always differentiates between planned and exploratory analyses and a priori and post hoc tests, and reports the results of all planned analyses regardless of statistical significance. If you have questions about these findings, please email Mallory.