Menu
October 24, 2022
Surge and decline: How does the president in power affect state legislatures?

Abstract: This analysis explores ‘surge and decline’, at the state legislative level. Surge and decline is a phenomenon where members of the president’s party tend to win seats in congress in the year the president is elected, but tend to lose seats in midterm congressional years. We collected the total number of state senators and representatives from both major parties (Democrats and Republicans) in all states for presidential and midterm years from 2010-2020 and just in battleground states from 2000-2020. The surge and decline phenomenon was observed at the state legislative level in all but 2 election years: 2002, the midterm shortly after 9/11, where Republicans saw a surge of support in a traditional decline year, and 2020, where Democrats saw a decline in support in a conventional surge year. State legislative trends tend to track congressional trends, though not necessarily to the same degree. Finally, surges observed were smaller than declines, with the largest surge observed in a surge year (6.32%) being smaller than the smallest decline observed in a decline year (-8.17%).

James Campbell’s revision of Angus Campbell’s 1960 surge and decline theory (the leading theory in this literature; see Gerschtenson, 2002)  argues that: 1) presidential elections cause a surge of voter excitement and participation that recedes once the president is not on the ballot, and 2) independent voters who are caught up in the presidential surge don’t vote as often, or for the President’s party for US House, in midterms when the president is not on the ballot. While this theory has been challenged since its conception, the pattern in US elections is unmistakable, with the sitting president’s party only gaining US House seats in a midterm election 1 time since 1946.

However, whether this same pattern exists for state legislature seats is not well- or recently-studied. This analysis sought to determine, for the years 2010-2020, if the president’s party lost or gained seats in state legislatures during the midterm elections. Further, how does the magnitude of this shift compare to the change in congressional seats? This report will explore the extent to which this trend at the congressional level does or doesn’t extend to state legislatures.

For the battleground state analysis, we included Arizona, Florida, Georgia, Michigan, Minnesota, Nevada, North Carolina, Pennsylvania, Texas, and Wisconsin. We collected 2000-2008 data for all 10 battleground states except Florida, Michigan, and Nevada. We also collected data about partisan control of federal seats in congress from US House of Representatives and US Senate records.

Note that in this analysis, “congress” and “congressional” generally refers to the combined House of Representatives and Senate, unless otherwise stated. US Senate was included due to the fact that there is evidence for surge and decline and presidential coattails at the US Senate level (Burmila, 2014; Campbell & Sumners, 1990; though it may be weaker than in US House), and also due to the fact that state senate seats were included alongside state house seats in the state legislative numbers.

For the exploratory battleground analyses, we looked at 10 “swing” states going back to the 2010 election and 7 of those states going back to the 2000 election. The states chosen as battleground states had the 10 closest 2020 presidential race 2-way margins: Arizona, Florida, Georgia, Michigan, Minnesota, North Carolina, Nevada, Pennsylvania, Texas, and Wisconsin. In addition to their close margins in the 2020 election, 8 of the 10 states have been in the 10 closest margins in 2 or more of the past 3 Presidential elections (2020, 2016, and 2012). The other states, Texas and Georgia, have rapidly changing demographics as both are popular destinations for folks moving from more expensive, progressive states. The states omitted from the 2000-2008 elections due to data availability are Florida, Michigan, and Nevada. It is important to note that the elections represented in these data were conducted using 3 different sets of legislative and House of Representatives maps (2000, 2002-2010, 2012-2020).

1) It sought to determine if there was evidence for the surge phenomenon at the state legislative level, where the elected president’s party experiences an increase in seats occupied in the state legislature in presidential election years.

2) It also sought to determine if there was evidence of the reverse phenomenon, decline, where the sitting president’s party loses state legislative seats in midterm years.

3) It investigated how these state legislative surge and decline trends relate to the trends seen at the congressional level. And,

4) we investigated a longer period in a select number of swing states to see what the measures look like in some of the country’s most competitive chambers.

The traditional understanding of the surge part of surge and decline suggests that the president-elect’s party usually wins seats in the US House due to a surge of enthusiasm in presidential years. This is known as the surge (or presidential coattails). The first aim of this report was to look at the surge phenomenon at the state legislative level.

These trends suggest that the surge and decline pattern often, but not always, holds true at the state legislative level. Further, this dataset only comprises 3 presidential elections. A minimum of 6 or more presidential election cycles would be ideal for establishing a more reliable pattern. However, it is important to note that modern politics and partisanship may be distinctly different from past trends. Shifts from past trends would be in keeping with evidence that the surge and decline phenomenon at the congressional level is becoming weaker/less reliable as presidential coattails (a driving force behind presidential surge) are less reliable in the modern era (Ferejohn & Calvert, 1984). Further, map changes and changes in the number of US House representatives in different states each decade due to redistricting make comparisons over a long period challenging.

It is interesting to note how, even when the pattern is followed, the numbers tend to be small. For instance, the 2008 landmark election of Barack Obama only saw a downballot net increase of 11 seats for Democrats in battleground states. It is unclear if these relatively small shifts were responsible for a significant shift in the ultimate partisan power in state legislatures.

*We only have pre-2000 election data for 4 of the 10 battleground states: Arizona, Minnesota, Pennsylvania, and Wisconsin, so 2000 election gains cannot be calculated.

This analysis suffers from the same short timeline as the surge analysis. Still, with more consistent data, it suggests that the seat loss for the president’s party in the midterm election may be more reliable than the surge associated with a Presidential election in recent years. This imbalance may indicate something about presidential coattails, which are missing during midterm years.

The same pattern seen nationwide was also seen in battleground states in midterm years (see Table 4). The exception was the 2002 election, which took place about a year after 9/11, during military action in Afghanistan (‘Operation Enduring Freedom’), and amid the push for military action in Iraq (‘Operation Iraqi Freedom’ began in 2003). Besides 2002, the presidential out-party gained aggregate seats in state legislatures, and the presidential in-party lost seats in all other midterm elections.

It’s notable that these shifts, known as declines, are much larger in magnitude than the surges seen in presidential election years during the same time period. The declines that follow the surges appear to wipe out all gains seen in the surges and more. The largest magnitude presidential year surge was 6.32% for Obama in 2012, and the smallest midterm year decline was 8.16% for Obama in 2014. This means the smallest midterm decline in the years investigated is larger than the largest presidential surge observed. 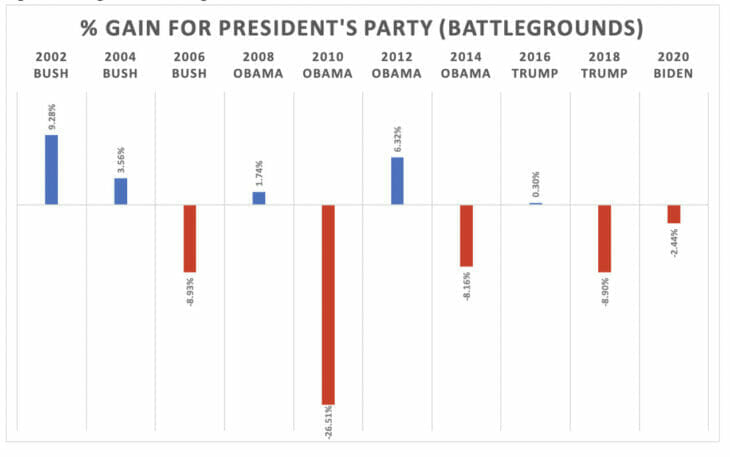 It is difficult to generalize these percentages to project Democratic losses for 2022. Each election year is unique, and outcomes are dependent on things that happened in previous election years. If 2022 holds the pattern we observed, Democrats should expect a decline in the number of state legislative seats occupied, and Republicans should expect an increase. Over the previous 2 decades, the magnitude of the declines state legislative co-partisans of the sitting president experienced ranged from 8.16% to 26.51%. Even if we cannot predict an exact number, the trend would suggest that, barring a 9/11-level event, Democrats are looking at significant midterm state legislative losses.

(3) Relationship between state legislative and congressional surge and decline.

When comparing state legislative trends to trends in Congress in the same year, almost all election years track in the same direction. The only exception was the 2016 election, when Republicans gained state legislative seats in a traditional presidential surge but lost seats in Congress. And though we do not have the equivalent data for state legislatures, it appears that George W. Bush did not see a congressional surge in the 2000 election, with Republicans losing seats that same year. See Table 5.

Interestingly, the magnitude of the trends is similar for some elections and much larger in congress for others. This is partially due to there being fewer seats in congress, such that a single seat is a much larger percentage of total congressional power than state legislative power. But it’s worth noting that in the 2010 and 2018 midterm elections, which were both midterms that occurred during a president’s first term, congress saw larger magnitude shifts in seats than did state legislatures. But, echoing the state legislative trends, the smallest shifts mostly occur during presidential elections, while larger shifts mostly happen during midterms.

Table 5. Surge and Decline for Congressional and Legislative Seats by Party

Overall, the data suggest that the surge and decline phenomenon that has been observed at the federal level also exists in state legislatures. In the entire country and in battleground states only, we observed a relatively reliable pattern of surge and decline. Cases in which patterns deviated, like the 2002 midterm where Republicans saw an increase in seats rather than a decline, and the 2020 presidential election where Democrats saw a decrease in seats rather than a surge, were rare. These trends were also seen in crucial battleground states.

Interestingly, and perhaps most importantly, it appears that at both the state legislative and Congressional levels, the decline phenomenon is larger in magnitude than the surge phenomenon and may be somewhat more reliable in recent years than surge, at least in battleground states. Declines were devastating in size compared to surges. Presidential copartisans appear to get a small boost of support when they come into office, followed by a precipitous drop in support that results in an aggregate midterm decline of seats that dwarfs the surge.

There are a variety of limitations to the data. There are only 3 presidential and 3 midterm elections in the state legislative analysis of the entire country. Even when election data is extended back to 2000, that only adds one additional president, George W. Bush, to the data. The limited time period and the small number of individual presidents make it challenging to draw firm conclusions or use this data to make future predictions.

Further, the battleground states investigated in the battleground investigation are limited in number. Finally, this data is correlational. It is impossible to know why any of these gains or losses occurred, or why some years did not follow conventional patterns, which limits our ability to say what happened in these elections with certainty. Though it may be helpful to extend further into the past, increasing partisanship and decreasing ticket splitting may suggest that including more elections moving into the future may give us a clearer picture of modern surge and decline.

Based on this data, both congressional and state legislative Democrats should expect to lose seats in the 2022 election. Though it is impossible to project the magnitude of the loss, Democrats would be well-served to take this election seriously.

You can find the dataset for this project here.

Gershtenson, J. (2002). Campbell v. Campbell: An Examination of the Original and Revised Theories of Surge and Decline. Journal of Political Science, 30(1), 1.