Menu
May 14, 2021
The skill of the chase 2:  Do chaser postcards help to amplify the utility of an earlier voter contact?

Abstract: This study tested the efficacy of postcards that follow up on a successful voter contact made by a campaign in increasing voter turnout. Six state legislative campaigns in 4 states provided SDAN with a list of people that they had successfully contacted and identified as supporters through phonebanking or canvassing. A randomly chosen half of these voters received a “Get Out the Vote” (GOTV) postcard shortly before the election providing them with information about how to vote and, for contacts in states besides Florida1, reminding them of the contact they had with the campaign. In the analysis, the raw numbers trended in the expected direction, with more voters in the postcard chaser condition voting than voters who did not receive a postcard, though this difference was not statistically significant (p = 0.923). Interestingly, the postcards had a similar effect as in SDAN’s prior 2019 pilot study, with some campaigns completely unaffected, some experiencing backlash, and some experiencing a small boost in turnout (though none were statistically significant). Small sample size, high turnout tendencies, and messaging requirements in Florida were all limitations of this study.

Objective: This study explored the efficacy of following up a successful voter contact with a handwritten GOTV postcard reminding voters of the previous contact as a way to increase turnout.

Background: SDAN has run a few studies that suggest that using handwritten postcards to “chase” an effective voter outreach attempt may be more effective than using handwritten postcards as a standalone tactic (see the voter registration chase studies we conducted with VPC here and here). In order to test this chaser approach in a voter mobilization context, SDAN ran a pilot study in 2019. Overall, that study did not find GOTV chasers to have a statistically significant impact on voter turnout in that sample. However, the sample was small and it is possible we might have been able to see a statistically significant effect in a larger study.In order to expand on the pilot findings, SDAN ran a larger study in 2020 with twice the candidates and states represented. The larger pilot study investigated the same question: Do voters who have a successful phone or canvass contact with a campaign, as defined by the voter identifying as a supporter, vote at higher rates when they receive a GOTV chaser postcard reminding them of the earlier voter contact?

Specifics: Six state legislative candidates across four states (Florida, Georgia, North Carolina, and Wisconsin) worked with SDAN to chase supporters, identified via canvassing and phonebanking, with handwritten GOTV postcards. As in the first pilot, campaigns gave SDAN contact information for voters who had expressed support for the candidate (identified as leaning towards or definitely supporting the candidate). SDAN randomly chose half of the supporters contacted by campaigns to receive a handwritten GOTV postcard shortly before the general election. The postcard message reminded voters about the contact they had with the campaign (in all states but Florida) and provided them with information about how to vote. The other half did not receive a handwritten postcard. 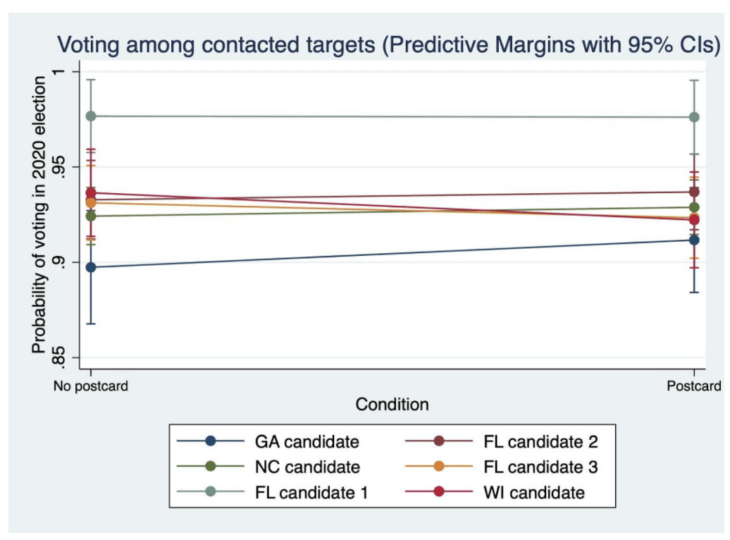 This study helps to continue the investigation into chaser postcarding. As postcarding continues to be popular among volunteers and economical for campaigns (as volunteers shoulder the lion’s share of the cost), determining best practices for postcarding remains an important goal. The results of both of SDAN’s GOTV chaser studies to date were underwhelming, but the data suggests that the sample was not truly a GOTV sample. This means that this tactic should be replicated in a low-mid turnout propensity sample with more room to move in their turnout likelihood. Further, a larger sample size is necessary to truly detect an effect. This means that tactics to increase the number of contacts and identified campaign supporters, such as paid phonebanks and canvasses, should be explored.

1 Due to in-kind donation laws in Florida, we were unable to mention specific candidates in the postcards. Since this is a departure from the intentions of the treatment to reactivate the campaign contact, we conducted the same analyses on a restricted sample composed just of the GA, NC, and WI candidates. It displayed a similar pattern of results, and condition and interactions between condition and candidate were similarly non-significant.