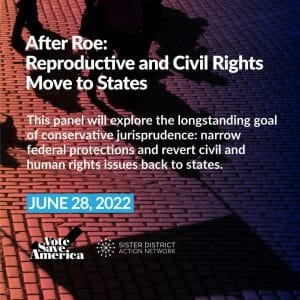 After Roe: Reproductive and Civil Rights Move to States

This panel took place just a few days after the Dobbs decision was released by the Supreme Court. As Erin noted, “Every time I approach this topic I’m reminded again of how ruthless and inhumane it is for anybody in a country to seriously think that it should be okay for anybody to be forced to be pregnant and give birth.” In the wake of Dobbs, abortion access now falls fully within the purview of states. Abortion access has never been universally guaranteed, and this development, as with prior restrictions, will disproportionately impact low income people, Black, Latino and Indigenous people, young and LGBTQ+ folks and people in rural areas. After decades of failed policies rooted in systemic racism and oppression, these folks will disproportionately lack the resources necessary to cross the expanding abortion desert to seek care. As Imani urged, “we need to build a better movement, we need to build a more inclusive movement, and we need to build a movement that focuses on the most marginalized among us, and a movement that is led by those people.”

On the other hand, states including Colorado, California, Connecticut and Virginia have expanded and enshrined the right to abortion services into state law. Panelists Imani Gandy, Erin Ryan and Leah Litman explored the conservative jurisprudential goal of narrowing federal protections and reverting civil and human rights issues back to states, and considered whether the end of Roe v. Wade is an example of how we may be experiencing the death of the ‘rights revolution.’ The panel explored these trends and discussed what can be done to bring the civil and reproductive rights (and justice) revolution to our states. Leah summed up the task ahead perfectly: “In order to win and in order to get a sustainable victory, we need to do it at the state and local level.” 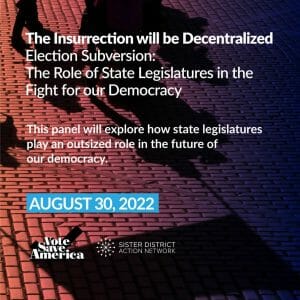 The Insurrection will be Decentralized – Election Subversion: The Role of State Legislatures in the Fight for our Democracy

Panelists Brian Beutler, Rep. Malcolm Kenyatta and Dahlia Lithwick explored how state legislatures play an outsized role in the future of our democracy. The January 6th hearings provided us with explosive evidence of how Trump and key officials in his administration attempted to strong-arm state legislators into putting up fake electors and changing election outcomes. And in key states, Republicans are still building toward a future where they can engineer election outcomes, by modifying the laws and rules governing election administration and limiting the ability of state courts to curb partisan redistricting and subversion. Rep. Kenyatta highlighted an important trend: “[Pennsylvania Republicans] are not trying to throw out everybody’s votes – they’re trying to throw out votes of very specific folks: votes from people from communities like mine in North Philly that I represent, people who look like me, young people, folks who they do not believe are going to support their agenda.”

On top of that, an arch-conservative Supreme Court appears likely to thwart a constitutional challenge to this state power grab via the Independent State Legislature theory — taking up a case next term which would provide state legislatures with complete control over election administration. Dahlia laid out how the independent state legislature theory “is exponential and also existential — it literally confers upon state legislatures uncheckable power to do whatever they want in election administration.” We must pour resources and attention into state chambers, and as Dahlia said, “understand that the locus of power now is state races and that we really ignore them at our detriment.” What we do now to build state power will determine the fate of our democracy.

The next events will be on October 25 and December 13. Sign up here.