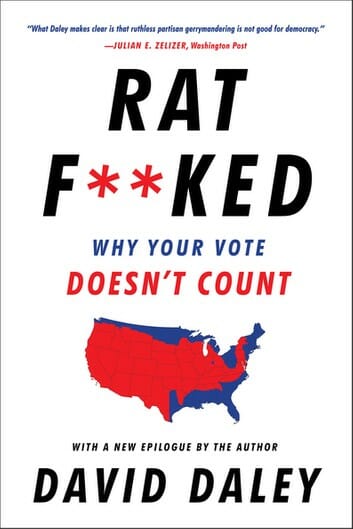 RATF**KED: Why Your Vote Doesn’t Count by David Daley

Also watch the Fireside Chat with author David Daley and Dr. Gaby Goldstein! They discuss the key points of the book, voter suppression methods like gerrymandering, and the critical importance of state legislatures in protecting our voting rights, the freedom to vote, and the democratic process as a whole.

Sister District Action Network (‘Sister District’, more info at the bottom of this webpage) is delighted to kick off its quarterly book club! If you haven’t joined, please sign up here to vote on future books and keep in the loop with regard to book club events and information!

Our inaugural book is Ratf**ked: Why Your Vote Doesn’t Count by David Daley.  This reader’s guide provides: A) discussion questions; B) additional reading suggestions; and C) facilitator’s guide for folks who will be leading book discussions in person (highly recommended!).

The Big Picture – State Leg. Why are state legislatures so important in terms of redistricting and, consequently, gerrymandering?  Are they a good “bang for the buck” in terms of resources and reward?

Why Is Gerrymandering Problematic?

How Did We Get Here?

Where Do We Go From Here?

Podcasts and videos from FiveThirtyEight.com about gerrymandering:

SDAN is affiliated with the Sister District Project, but it is a separate legal entity.