Deb Andraca is a wife, a mother of two, a teacher, and an active community volunteer. She has worked for large international companies, political campaigns, trade associations and non-profit organizations. She has also spent 17 years working hard to make Wisconsin’s 23rd assembly district better for families, and she believes there’s still much work to be done.
​
Deb’s career began in politics. After graduating from Syracuse University, she moved to Washington DC, where she worked for the Solar Energy Industries Association, a trade group of large and small renewable energy companies. While working full-time she earned a master’s degree in political management at George Washington University. When her husband’s career moved their family to Chicago, then Houston, and then finally Milwaukee, Deb served as a press secretary for a Congressional campaign, a communications director and lobbyist at the Environmental Law and Policy Center of the Midwest, and a Vice President at FleishmanHillard Public Relations.

Deb then became a stay-at-home mom to raise her two young children. While doing so, she continued to serve her community. She led two Girl Scout troops, volunteered at the local school, hosted fundraisers for the Urban Ecology Center, and served as PTO board member and president. As her daughters got older and more independent, she became active with Moms Demand Action for Gun Sense and started taking classes at Alverno College to earn a teacher’s license.

Upon earning her license, she began to substitute teach at local public schools and experienced first-hand a lockdown drill in her kids’ school. The lights were turned off, students were gathered away from doors and windows, and the entire classroom of third graders was silent and fearful. It was frightening for everyone in the classroom, and that experience drove Deb to take action, so that no child would ever have to face this fear.

For many years, as a constituent, Deb tried to convince Representative Jim Ott (R) to support common-sense gun laws, take action to prevent climate change, support Wisconsin’s public schools and teachers, and ensure all Wisconsin families had access to affordable, high-quality health care. Most of Deb’s calls, letters and meeting requests were ignored. So she decided to run for State Assembly and represent Wisconsin residents like herself.

Common Sense Gun Laws
When Deb met with Jim Ott just a few days before the Wisconsin special session on gun safety, she asked him to support background checks and extreme risk protection orders. Jim Ott said no. Deb will say YES to measures that reduce gun violence while protecting Second Amendment rights.
​
Deb believes that we all need to feel safe in our homes, on our roadways, in our schools, and in our places of worship. To help prevent mass shootings, and to help reduce the epidemic of suicide in the state of Wisconsin, Deb supports measures such as red flag laws that allow a judge, using evidence and due-process protections, to remove guns from individuals who are a threat to themselves or others.
​​
Safe and Fair Elections
Deb believes that on Election Day, we want to spread democracy, not Coronavirus. Jim Ott voted against giving Wisconsin voters access to voting by mail — from the safety of his home. Deb wants to make sure that every eligible voter can vote, and vote safely. She also believes that voters should choose their politicians, not the other way around, and will fight for fair redistricting in Wisconsin.

Education
Today, Wisconsin’s share of school funding remains below its 2011 level, despite the state’s recent claims of “historic investments in public schools.” Deb believes the state should invest more in public education, and ensure that local schools are equipped to prepare students for the future.

The COVID-19 pandemic has highlighted how connected we are globally. Students need skills such as flexibility, collaboration, adaptability, and critical thinking to succeed in the global economy. Deb believes that the state needs to equip students and teachers with the technology to prepare students for the careers of the future.

For far too long, the Wisconsin Legislature has been playing politics with school budgets. This has caused the state to lose quality teachers, and some students are unable to get the special education intervention they desperately need. Deb believes all students deserve high quality schools, and that education should not be a partisan issue. As a State Representative, she will support full funding for Wisconsin’s public schools.

Health Care
The COVID-19 pandemic has revealed massive shortcomings in Wisconsin’s health care infrastructure. When they should be coming together for the public schools, elected representatives in the state are trying to score political points at the expense of public health. For years, the state’s public health departments have been understaffed and underfunded. Deb will fight to make sure that they have the funding they need.

For too many Wisconsin families, health care is inaccessible or unaffordable. Due to the COVID-19 pandemic, millions are losing jobs, which for many of these families means losing their health care coverage. Deb believes that Wisconsin must expand BadgerCare and accept federal Medicaid dollars to make health care coverage more accessible for families. Doing so will save millions of state dollars while providing additional federal dollars that can be used in the fight against COVID-19. Deb also believes the state should make COVID-19 testing and treatment available at minimal cost to every resident in order to prevent the spread of the disease.
​
Restoring Wisconsin’s Environmental Legacy
Deb worked in Washington DC at the Solar Energy Industries Association, and she later became communications director at the Environmental Law and Policy Center of the Midwest. She learned how green technology can create great 21st century jobs and drive economic development, and she worked to preserve natural areas such as the Chequamegon-Nicolet National Forest and valuable prairie land along the Mississippi River. Jim Ott is a former TV weatherman who denies that climate change is real. In fact he used to publish a newsletter “debunking” climate scientists. He says he loves to go fishing, but he votes against measures that would protect Wisconsin’s waterways and air from pollution. The 23rd assembly district has more than 20 miles of Lake Michigan coastline that need protection. Deb will vote to protect Wisconsin’s natural areas while driving economic development with sustainable green jobs. 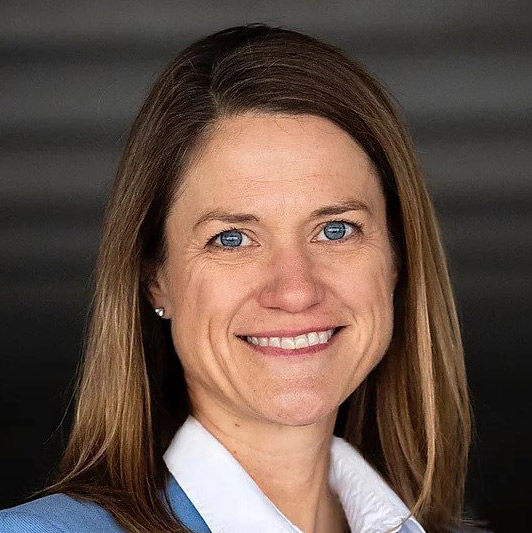 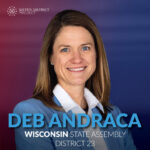