Judy has spent her life serving families in the Northwest Valley as a mom, teacher and community leader. She grew up in Phoenix where her dad went from shop teacher to principal of the first vocational high school in the Valley, and both of her parents taught her the importance of education, respect, and working together.

As a teacher for 27 years in the Glendale Union and Peoria Unified School Districts, she helped launch countless young people on their own American dream. As a mom, she raised her two sons there, where they got a great education in Washington and Glendale Union District schools and played soccer, Little League and performed in the community. As a co-founder of Theater Works and long-time board member, she learned the magnifying power of listening and working together that gives everyone the chance to thrive.

Now, Judy is ready to represent her community as a member of the Arizona State House. She’s spent her life listening to the community – and knows that by working together, we can all thrive.

Education
Judy grew up in Arizona where her dad could support their family of 5 on his teaching salary. When she became a teacher herself, she could continue to do the work she loved and still get by, even after becoming a single mom. But times have changed, and Arizona’s teachers are no longer paid adequately. Teachers should not have to work 4 jobs to make ends meet, as did one teacher Judy knows. That teacher finally left Arizona for a much better-paying job teaching in another state, and her story is far from unique. Last year alone, children in at least 1,600 Arizona classrooms had no permanent qualified teacher. Judy knows Arizona is failing to give too many children their chance at the American dream, which jeopardizes the state’s economic future as well. Arizona’s Republican-controlled legislature has cut $4 billion from K-12 education in the past ten years. Judy will fight to properly fund public education in Arizona.

Quality Jobs
Judy knows that Arizonans are hard-working, smart and independent. In recent years, though, Arizona has missed out on opportunities for great new jobs because major corporations have decided NOT to establish headquarters in Arizona. They’ve cited Arizona’s lack of commitment to our public education system as a major reason. As a mom and teacher, Judy knows Arizona’s potential to create a strong workforce for the 21st century starts with a strong school system, and she will fight to grow opportunities for business and workers.

Health Care
Judy has friends who find it impossible to afford health insurance, despite doing everything right: sacrificing to get an education, pursuing their dreams, and working hard in respected careers. When they wind up in emergency rooms, it’s financially disastrous for them. No one should have to go bankrupt because they’re sick. Judy will fight to further expand Medicaid, including pursuing policy changes to allow people who do not qualify Medicaid to buy-in to the state’s Medicaid program.

Environment
Growing up in Arizona, Judy had the privilege of exploring the unique beauty of our deserts, canyons, and forests with her family. These precious resources are now vulnerable to the disastrous consequences of climate change. Rising temperatures, air pollution and water contamination pose serious threats to the Arizona way of life. Arizonans are right in their demand in wanting to address these challenges. Judy will fight for clean, renewable energy generation and policies that protect our environment, climate and health, while also providing economic and social benefits. Judy will work with scientists, environmental experts, and business leaders to ensure responsible policies so that future generations will have a healthy, sustainable environment in which to raise their families.

Immigration
Arizona must have a strong, secure border to stop the flow of illegal drugs and human trafficking. Judy supports the agencies charged with our border security and will work to equip them with the new technology, facilities, and manpower to do the job right. But truly securing our borders demands comprehensive immigration reform. Judy believes all Arizonans deserve a secure border and an immigration system that keeps people safe while also treating people with dignity and respect. It’s not only the right thing to do, but it’s good for our economy as well.

Dark Money
When corporations and wealthy individuals spend millions to elect their favored candidates it robs citizens, whatever their party, of our power to determine the direction of our government. Arizonans recently learned APS secretly contributed over $10 million to elect corporation commissioners in 2014 who then approved a $95 million per year electric rate increase for them. That’s wrong. Judy supports the Outlaw Dirty Money campaign that will make sure Arizonans have the right to know who is influencing state and local elections. Judy will always stand with the people, never with special interests. 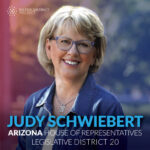