Jonathan Kassa has spent his career working to build educational climates that are safe, vibrant, and conducive to long-term learning.

He has extensive experience in victim advocacy and working to create campus systems that give survivors the tools to advocate for themselves.

That’s no easy task on college campuses and will be an even more challenging task in the Pennsylvania State House, but Jonathan believes his career and his experience as a Director of the North Penn School District Board have given him the skills to take on that challenge.

“I come from a family that’s always cared about those who don’t have as much of a voice,” Jonathan reveals in a conversation with Sister District. “Speaking up, whether it was for myself or for others, was just part of what we did in the Kassa family.”

“If there’s anything that’s been impressed upon me over the past few weeks, it’s that for social justice, we need to have an unrelenting desire to sustain this type of change,” he says, referring to the protests against police violence and racial injustice happening around the country today.

“I still remember Amadou Diallo. I remember the Rodney King riots. We have over 400 years of baked-in injustice in this country. Our political leaders have to realize the kind of impact that this has on our entire society.” He admits, “I know I’ve been too patient with my privilege, and that’s not enough.” If elected to the State House, he plans to bring the voices of Black leaders and residents to the forefront and start working to develop a more equitable society.

The Importance of using your voice

Jonathan recalls that he learned “the importance of using your voice to make the world a better place” when he and some of his neighborhood friends got together to advocate for a street hockey rink in their neighborhood. “It took a few years of going to meetings and pressuring the local officials, but we finally got what we wanted,” he says. “That’s how I learned the importance of making a difference locally.”

That lesson followed him throughout his career and convinced him to run for North Penn School board when he saw that his School Board representatives were not reflecting the values and priorities of the community in order to improve education experience and outcomes for students.

When he won that seat, Jonathan and his Democratic colleagues moved with what he calls “a real impatience.” He adds that, “after 52 years of Republican control of the School Board, in just 2 years of Democratic control, we’re already delivering tangible results for our community.”

In those two years, they have instituted full-day kindergarten, a program that Jonathan’s experience shows “will benefit students and the larger community. Even retirees who no longer have kids in the district understand what the full-day kindergarten program has done to help keep their home values up.”

One important goal for Jonathan is to make institutions of learning safer, while fostering “a vibrant culture.” Jonathan and his colleagues have already been working to do just that in the North Penn School District, which has more than 13,000 students, with over 3,000 at the high school alone.

“In a school that size, you might see things like bullying and harassment, a climate that is not supportive for students who are underrepresented and marginalized,” Jonathan says. As a result, the School Board has worked to hire more counselors and climate coordinators, who listen to and engage with students to help give them the tools to succeed. Jonathan believes that every school district in Pennsylvania should implement some of the same holistic, proactive policies and practices to keep students safe, while supporting the best possible climate for learning and creativity.

On the North Penn School Board, Jonathan also helped create and lead one of the most innovative tax credit programs for seniors in the state. The program aims to offset the rising property tax rates due to the state’s inadequate funding of public education. Jonathan stresses that, “increasing local taxes is a terrible symptom of the lack of leadership in Harrisburg. So, we are working to offset that rise in taxes for our seniors, who often have to make a decision between filling a prescription and filling a gas tank.”

In the State House, Jonathan’s goal is to resolve the property tax issue by addressing its root causes, such as unfunded mandates for charter schools, special education and the state pension system. He believes that the State Legislature must fully and equitably fund public schools across the state, rather than leaving the bulk of these costs to localities. “The legislature’s refusal to really take on this issue is also why we have such inequitable public education across Pennsylvania. That’s not good for our kids and it’s not good for our communities. We have to tackle this issue at the state level.”

Jonathan is running for State House today for many of the same reasons that he ran for School Board.

As one might expect, school safety is a top priority for him. Jonathan says, “we spend millions of dollars every year in our community to try to make our schools safer, but there’s a gaping loophole in state law that the Republicans have refused to close, and that’s the purchase of semi-automatic weapons, the gun show loophole, and the lack of red flag laws.”

Jonathan admits that no one individual law could end the epidemic of gun violence, but he is sure that “as a larger strategy, passing these laws together will create a much stronger fabric for our communities that will help to prevent gun violence, one of many issues that visits every single community across Pennsylvania.”

Gun violence represents just one of the many problems that Jonathan believes the state needs Democrats in office to solve.

Jonathan believes that once elected officials get into office, it’s important that they get to work fulfilling their promises as quickly as possible. “I would rather make the right vote on a tough decision and lose my seat than try to stick around for a dozen or more years.”

He says too many politicians currently serving in the legislature take the opposite approach. “We’re dealing with many of the symptoms of the State Houses’ inability to address the structural problems that all of our communities must deal with, and we’re running out of time to correct course,” he says.

In Jonathan’s view, it is vital that Democrats flip both chambers of the Pennsylvania State Legislature this year. “A majority of Pennsylvanians want these common sense reforms, but they will never happen so long as Republicans are running Harrisburg.” He is adamant that this is an election in which the status quo is an unacceptable path forward.

In the State House, Jonathan will have what he calls “a real impatience to get things done.”

“If I win, there’s a good chance we’re turning Pennsylvania blue,” he continues, “ which means we can end the gerrymander, break the NRA stranglehold on our communities, and have equitable school funding.” 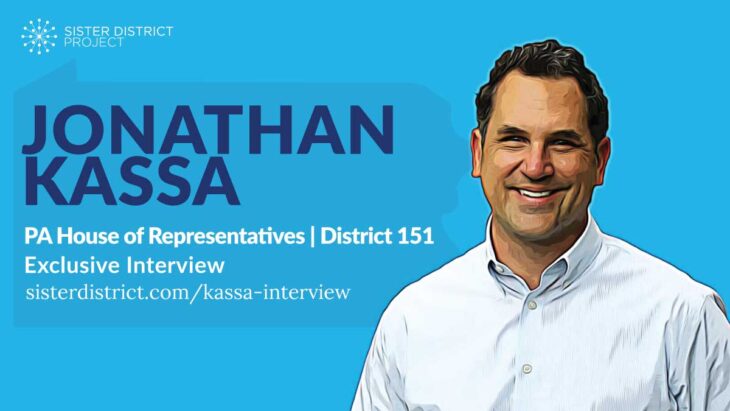 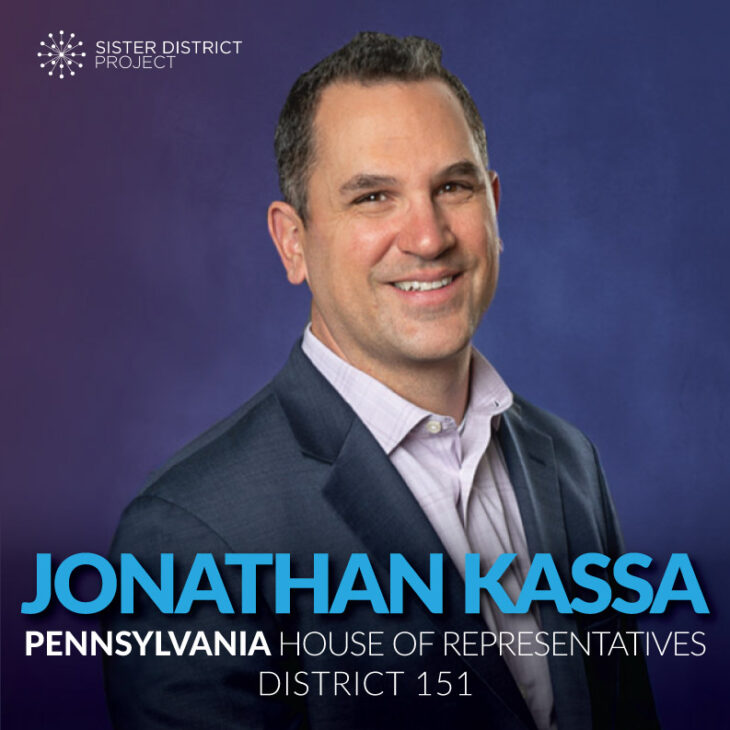