Abstract: Sister District Action Network (SDAN) and the Voter Participation Center (VPC) conducted an experiment in April-May 2020 directly comparing the efficacy of postcards and letters as chaser communications to improve the response rate to voter registration forms. Half of our registration targets in Pennsylvania received a partially handwritten postcard or a partially handwritten letter approximately 5-7 days after receiving a VPC voter registration form in the mail, and half of targets did not receive a partially handwritten chaser communication (control group).  All targets were tracked to see if they registered to vote via VPC’s effort. Results indicate that both conditions elicited some degree of backlash in this sample, with fewer targets registering after receiving either type of partially handwritten material. Further, we found no difference between letters and postcards, indicating that, when postcards and letters contain the same information, they may not have different effects.

Objective: This experiment explored whether chaser handwritten mail might increase response rate to an earlier official-looking voter registration form; and further, whether targets who received a partially-handwritten letter might register at a higher rate than those who received a very similar partially handwritten postcard (or vice versa).

Background: Writing postcards and letters have become increasingly popular among volunteers, but the efficacy of these partially or fully handwritten voter communications is not well or consistently established. SDAN has conducted several experiments to establish best practices for postcarding, and has amassed a few results that indicate that postcarding may be useful as a “chaser” tactic that amplifies a previous voter contact (see here and here). Additionally, partially handwritten letters have also amassed some reported evidence from special elections that sending partially handwritten letters to voters increases voter turnout. At the time this study was conducted, no studies had directly compared whether postcards or letters might work better or equally in terms of encouraging people to register to vote.

Specifics: SDAN ran this study with VPC. VPC provided SDAN with a list of voter registration targets in Pennsylvania that were receiving voter registration mail (forms) from VPC. This list was composed of young people, people of color, and unmarried women. The list was pre-randomized into half control (who did not receive a postcard or letter to chase their voter registration form) and half handwritten communication groups. The handwritten communication group was further divided into approximately half postcard targets and half letter targets. Overall, this amounted to 70,046 in the control condition where folks did not receive a postcard or a letter, 34,970 in the letter condition, and 34,984 in the postcard condition.

In order to standardize the messaging across the letter and the postcards, volunteers purchased postcards created by SDAN that featured the printed content of the letter on the front of the postcard, with room for the handwritten message on the back. This allowed for a direct comparison of the two mediums when content is held relatively constant. SDAN recruited volunteer teams to handwrite the handwritten portions of the postcards and letters and mail them directly to Pennsylvania voters on April 27, 2020.

1) Partially handwritten chasers did not work in this sample. 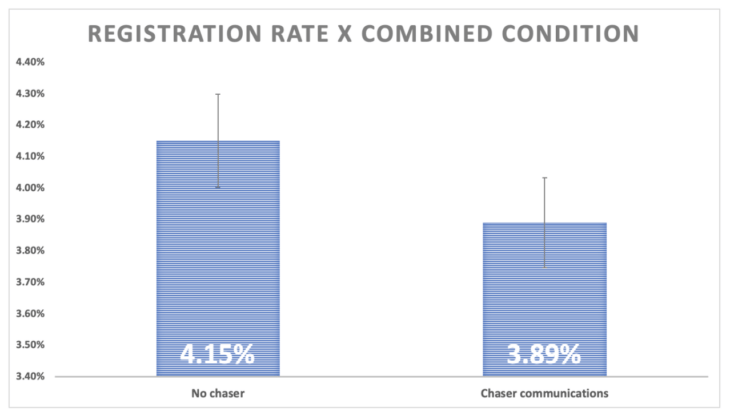 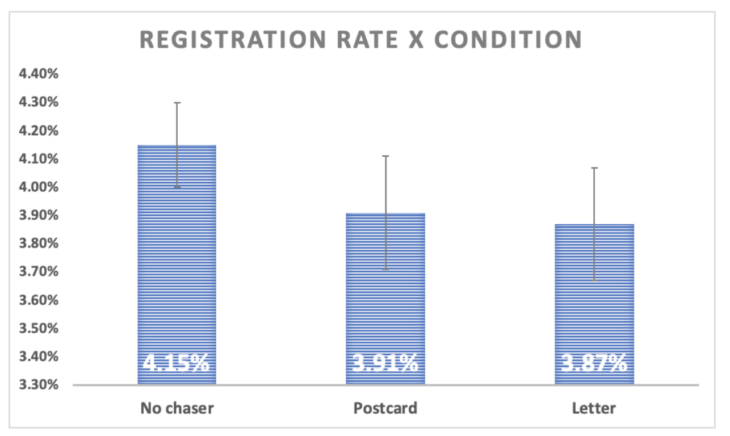 3)  Letters and postcards did not perform significantly differently from each other.

This study continues SDAN’s exploration into the most effective uses of postcarding. Unlike previous postcard chaser studies, we observed unexplained backlash in this study. It may be related to the pandemic, or it may be related to an increased level of societal strife in general. But this study’s results provide a cautionary tale that postcards and letters may not be behaving the same way this year as they have in the past.

However, the results of this study are not conclusive and would need to be replicated in order to further explore how letters and postcards may compare to each other as a tactic to boost voter registration.