This is it. The last Dispatch before the election. We are SO CLOSE — and we can’t let off the gas. Thank you all for pushing hard down the stretch!

The Political Director Dispatch gives a monthly snapshot of our field and fundraising toplines, insight into our political strategy and how our candidates are doing, new endorsements, and campaign and field activities are on the horizon.

I hope this Dispatch is useful! As always, let me know if you have thoughts or feedback.

Our field and fundraising continues to be bonkers — thank you so much for your crazy amazing organizing work!! Here are our current toplines (As of 10/13): 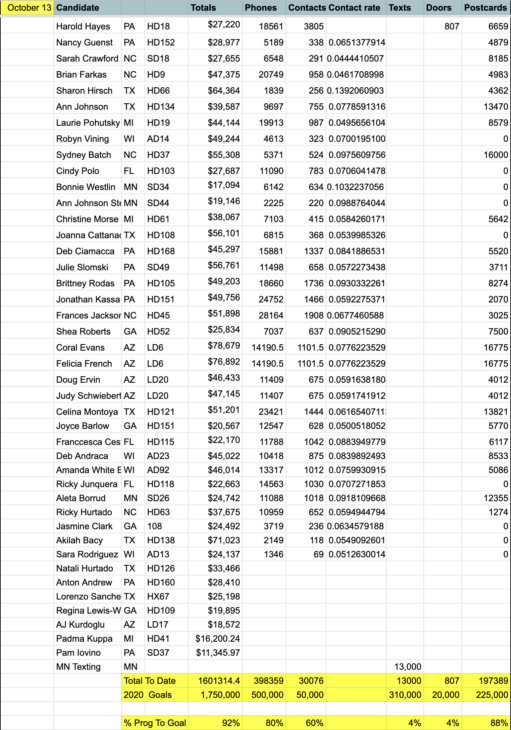 We’re so far ahead this year!! To put these numbers into perspective:

Other neat stats re: fundraising and field:

2. FIELD AND FUNDRAISING: PROGRAMS AND UPDATES

For our purposes here at Sister District, we are planning for a one-week GOTV sprint beginning October 27 through Election Day.

Our phonebanking program will remain unchanged during GOTV. You will have access to refreshed phonebanking lists through our password-protected site, and we will be obtaining metrics directly through each of our campaigns. We will not require you to track and report your phonebanking metrics to us, though you should continue to track these via your team spreadsheet, metrics dashboard or other method if it is already your practice.

As I mentioned in our call, Dems are going into this election in a good position to flip chambers. Things look particularly strong to flip the MN Senate, AZ House, and TX House – but that’s not a prediction, just my own thoughts based on what I’m seeing on the ground. Of course, absolutely nothing’s guaranteed and we will have to push all the way to the end. Many additional chambers could flip too. And beyond flips, I think that Dems are poised to pick up significantly more seats than initially expected in the WI Assembly and GA House. Those two are “dark horse” chambers in my opinion.

That last point bears repeating: while we are going after chamber flips in many places, it will be very important for all of us to celebrate where we get close to flipping, too. We have to pursue a longer-term strategy and build power over time. Getting within striking distance of flipping this year will force the GOP to the table on important issues, including redistricting and Medicaid expansion. Look at VA — Dems didn’t hold either chamber when the legislature expanded Medicaid. It’s because Dems were so close to flipping (1 in the House and 2 in the Senate) that we were able to force the GOP to the table. So while the prize in many states is that chamber flip, if we get close, that’s going to be extremely beneficial too, and put us in a better position on policy as well as put us into contention to flip next time.

As I mentioned during our call, we’re seeing a huge and historic increase in vote by mail (VBM) and early vote requests and returns. There are at least three reasons why:

In terms of requests: Total of 76.2 million ballots have been requested. Of requests, 44.4% Dem, 26% Rep, 28% unaffiliated. Dems have a 9.5m ballot request lead over registered Republicans.

At the state leg level, our campaigns either are or will have their voter refreshed daily to cull out people who have already voted. This includes the phonebank lists you are calling through. This data is now being updated daily in most of our states. This data refresh helps our campaigns reach out to folks efficiently.

Additionally, we will be hosting an Election Night party on Zoom from 4-8pm PT / 7-11pm ET. More details will be available from the Organizing Department.

Register here; add these calls to your Google Calendar or Outlook. Calls are open to all District Captains and Affiliate leaders; these are not recorded.

Huge thanks again from the very bottom of my heart for everything each of you are doing as we head down this final stretch. It will take every single one of us, doing every single thing we can, to get over the finish line. I’m grateful that we are all on this journey together.

With gratitude and hope! Onward for 19 more days!
Gaby