Thanks to all of YOUR hard work, the Sister District community has now raised over half a million dollars for our candidates this year. We encourage you to share the good news along with a link to donate to your candidates!

The Sister District community is on fire! Together, we have raised over half a million in small dollar donations directly for candidates. Our momentum is only growing – help us go even farther with a donation to [CANDIDATE NAMES] right now! [link to donate] 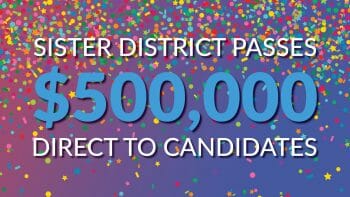 Ann Johnson is our current featured candidate! Ann is a candidate for the Texas House of Representatives, and has spent her career as a lawyer advocating for victims of human trafficking in Texas. She is also a member of the LGBTQIA+ community, and married her partner Sonya as soon as the law allowed. Read her inspiring interview here: https://sisterdistrict.com/johnson-interview

Sample posts below, and check out even more messaging on our Asset Library: https://assets.sisterdistrict.com/2020-candidates/Ann-Johnson/Featured-Candidate/

Ann Johnson has dedicated her career to combatting child sex trafficking and reforming the juvenile criminal justice system. This year, she’s taking her fight to the Texas House of Representatives. Learn more about @VoteAnnJohnson www.sisterdistrict.com/johnson-interview

Ann Johnson has dedicated her career to ending human trafficking in Texas. As a juvenile defender, she took the case of a 13-year-old child who was being tried for prostitution all the way to the Texas Supreme Court.

Ann was one of the first lawyers in the nation to argue that children who were being tried for prostitution were actually victims of human trafficking – and she won.

Read more about why Ann is bringing her fight to transform the Texas criminal justice system in our exclusive interview: www.sisterdistrict.com/johnson-interview

Candidate Statements
Many of our current candidates are speaking out in support of the Black Lives Matter movement. We have compiled a public facing tracker that contains the public statements our candidates have made so far, and we will update this tracker with additional statements as they become available.

How States are Responding to Protesters’ Demands
In addition to candidate statements, our very own Field Manager Ore Obiwumi penned an excellent overview of the current steps state legislatures are taking to combat police brutality:

Candidates in the News

Wisconsin candidate and sitting legislator Robyn Vining introduced the Healthcare Heroes Act to protect essential workers on the frontlines of the pandemic, including expanding testing and healthcare for them, as well as hazard pay: https://wkow.com/2020/06/29/lawmakers-introduce-healthcare-heroes-act-to-protect-health-workers-during-covid-19/

Join Sister District for a “post-screening” panel discussion on Slay The Dragon, the acclaimed documentary about gerrymandering. Your donation supports Sister District candidates fighting for fair maps and progressive change.

After flipping both chambers of the Virginia state legislature in 2019, the state was able to pass a slew of meaningful progressive legislation. Our work built on years of community organizing and movement building on the ground, and helped to get Democrats over the finish line. Although there is so much more to do, Virginia’s session this year is proof positive of how our work at the state legislature level can have a massive impact on everyday lives.

Sister District 2019 alumna Shanda Yates was one of the Mississippi legislators who voted to remove the Confederate flag from the state flag of Mississippi.

“The debate around Mississippi’s state flag is not new…The difference this year, according to Johnson, was the bipartisan leadership by first-term legislators.”

Sister District alumna Shanda Yates is one of those new legislators fighting for real change in Mississippi!

One more must-read blog post, from volunteer Lisa Auer: “Want to help save democracy? Be a poll worker!”