First and foremost, we would like to share our statement on the events of the last few days and weeks. Please feel free to share this statement, but we ask that if you do, please share in its entirety without edits or redactions:

We want to say this clearly and out loud: the acts of racism we see on a daily basis in this country, both overt and subtle, are abhorrent and unacceptable. We grieve the deaths of George Floyd, Ahmaud Arbery, Breonna Taylor, Tony McDade, and every Black person who has been a victim of police brutality. We condemn all actions that marginalize and/or endanger the lives and livelihoods of Black people.

America is a country of contradictions. It professes to champion equality and justice, when in practice those things only apply to the privileged few. We will never bridge the gap if we don’t talk about and eliminate the systems of oppression that perpetuate it.

Sister District will continue our work to elect progressive and diverse candidates to state legislatures, which is one of the best ways we can think of to bring about meaningful change. But that’s not enough. We will also continue to be allies and advocates for Black people—we will stand up, we will speak out, and we will not stop until every human has the dignity and respect they deserve. 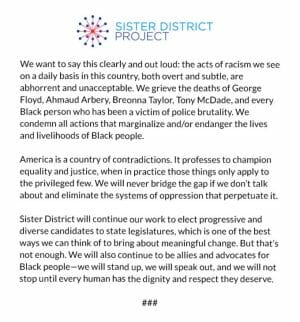 We could not be more proud – Sister District volunteers have donated over $300,000 in small dollar donations directly to our 2020 slate of candidates. That’s triple the amount we had raised by this same time in 2018! And, the average donation size is $24. This is thanks to all of YOUR hard work!!

We are thrilled to share that @Sister_District has now raised over $300k in small dollar donations this year, directly to our 19 state legislative candidates! The average donation is $24, which proves that the grassroots is stronger than ever. But we can’t stop now – donate now to make sure we ride the #BlueWave all the way through November! https://secure.actblue.com/donate/sdp-2020-candidates?refcode=social-300k

It’s hard to believe, but it’s true – Republican Representative Andrew Lewis had COVID-19, went to work in the capitol, and didn’t notify his Democratic colleagues who had been in close contact with him. Our candidate Brittney Rodas is running against Lewis. He has received an immense amount of blowback for his actions, and rightly so – it’s clear that he is willing to be cavalier with the health and safety of Pennsylvanians.

It’s shameful that Rep Lewis was willing to put lives at risk in order to avoid embarrassment over his own denial of science and facts. Pennsylvanians deserve to be represented by elected officials who won’t play political games with their health and safety. That’s why we’re supporting @RodasForPA – please join us in helping her campaign now! https://secure.actblue.com/donate/sdp-pa-rodas?refcode=teams-social

Before she came to Sister District, our very own Faith Lowe worked on Florida’s landmark Amendment Four, which restored voting rights to former felons. In this long form piece, Faith (a native Floridian) talks about this historic grassroots campaign to combat voter suppression in Florida; their initial success, subsequent legal challenges, and recent district court victory. This is one of the most closely-watched voter suppression cases currently in the court system, and will likely eventually reach the U.S. Supreme Court.

In 2018, Florida’s Amendment 4 ended one of the most egregious GOP tactics for voter suppression. Since then, Republican legislators in the state have been trying to overturn the popular ballot initiative. We must fight to flip seats in Florida and protect the will of the people.
https://sisterdistrict.com/florida-amendment-four-voter-restoration

Felicia is our first Featured Candidate of 2020! Read her incredibly inspiring interview, and share! One sample post below, and check out even more messaging on our Asset Library.

Are you interested in authoring a Letter to the Editor?

We are looking for volunteers to author letters to the editor for regional and local press, especially in our target states. We will help you write it – no experience necessary! Please email Lyzz if you’re interested.

Jennifer Carroll Foy is running for Governor of Virginia

She declared on Wednesday, May 27. Sister District supported Jennifer’s winning bid for the VA House of Delegates in 2017, when she was part of the historic blue wave that nearly swept the chamber. Jennifer’s campaign for governor is proof-positive that state legislatures are a pipeline for higher office. And if she wins, she’ll make history as the country’s first Black woman governor.

Takeaway: Republicans know 2020 is our last chance to secure control of state legislatures before the next round of redistricting. Their hit list also includes our target states of Minnesota, Florida, Georgia, North Carolina, Pennsylvania, Texas and Wisconsin – every dollar and every minute counts.

Takeaway: Republicans know that Democrats aren’t sitting idly by in the fight for state legislatures any longer. Now they’re trying a “subtler, more technical” approach, which was on full view in Missouri last week. They’re working to dismantle ballot initiatives – the will of the people – that call for non-partisan districting commissions. The GOP’s move in Missouri is a harbinger of their tactics to come.