As pundits and journalists marvel at the wave of Democratic wins in the recent Virginia elections, one race in particular has been catching special attention. Lee Carter, a 30-years old Democratic Socialist who lost the financial support of the Democratic Party, trounced the incumbent Republican house majority leader by 9 percentage points. To most, this came as a huge surprise, but for me and my fellow Sister District volunteers in San Francisco, it was validation of the core values that have driven us since the disastrous election of 2016. We believed that we could help Democrats win elections in unlikely places if we looked carefully for strategic, winnable down-ballot races and gave them as much help as we could from our super blue, resource-rich districts. Below is a recap of the journey we traveled with Lee Carter, where the biggest question for us wasn’t whether a socialist stood a chance in Virginia, but whether Democrats could still win at all.

I joined Sister District after the 2016 election, because like many people, I felt that the old way of winning elections had failed us. The experts and pollsters had failed to predict Trump’s victory. Voter disenfranchisement across the country was a problem that seemed to have no solution. Somehow, it just seemed like the “good guys” couldn’t win, anymore. I didn’t recognize the America that I saw on TV.

When I joined, it was for a lot of reasons. I knew that Sister District Headquarters had a crack team of data-driven researchers picking “winnable” races at the state level, based not just on historical data, but also key insights into the races, regional context, and candidates themselves. The group seemed to have a plan for winning a long-term, progressive majority while addressing the blind spots of the Democratic Party. Most importantly, the group wasn’t just a mailing list asking for donations or an algorithm in a black box — they were looking to build a healthy Democratic base. As a matter of fact, they were the first group having face to face meetings that I could attend, and I desperately needed that sense of community after such a traumatizing and devastating election.

Alongside a team of volunteer “District Captains,” we spent months mobilizing 800 volunteers in San Francisco for fundraising and get-out-the-vote (GOTV) efforts practicing on special election campaigns like Rob Quist and Jon Ossoff. We were thrilled when the research team paired us with our first sister race, Lee Carter’s, in April.

We weren’t professional organizers or political activists — many of us had never even made a single call in a phone-bank before — but we were motivated! One of the first things we did was coordinate directly with Lee’s campaign manager to set up a private video interview with Lee himself. You can watch the interview yourself, below.

June 4th Video Interview with Lee Carter. Apologies for the video quality, it was our first time doing this!

What is obvious from the interview is that Lee is both well-spoken and extremely thoughtful when answering questions. What you probably can’t tell is that seconds before the interview started, he was helping his wife deal with a projectile-vomiting toddler! I’m only half-joking when I suggest that his Marine corp training contributed to him being cool under pressure. It felt great to know that we were supporting a person whose struggles were so similar to our own. Lee was running for office for the very first time, having been motivated to run by his experience dealing with the Virginia healthcare system after a workplace injury left him temporarily disabled. He was running on the platform of single-payer health insurance. What’s more, we knew he was “all-in” on grassroots fundraising — he promised not to take a single dollar from corporations during his campaign. As a matter of fact, he returned a $1,000 check from one of his relative’s small businesses. This guy meant what he said!

Lee Carter was not an obvious choice for a brand new, fledgling activist organization to support. He was running against Jackson Miller, an incumbent who had been in office for ten years. Miller outmatched Lee in name recognition, in experience in public office, and most of all in funding. As a matter of fact, when we were first introduced to Lee, he had only raised a little over $25k, while Miller had over $275k handed to him by the Republican Party, just waiting in the bank. However, looking at the past voting records for Lee’s district in Virginia (VA-50), we knew we had a great shot at helping Lee defeat Miller. VA-50 voted for Hillary Clinton by a margin of over 12%, helped elect Barack Obama to the White House, Tim Kaine to the Senate, and Ralph Northam to Lieutenant Governor. What’s more, Jackson Miller had recently run for clerk of the Prince William Circuit Court and lost. We knew that as difficult as the odds may have seemed to others, with our help, Lee Carter could win!

From May through November, our volunteers swung into action. We hosted a series of house party fundraisers, raising over $28,000 as an organization for Lee Carter. We sent thousands of hand-written, hand-decorated postcards to voters in Manassas, Virginia, reminding them to vote for Lee on Nov. 7th. One volunteer in particular who was mourning the loss of a loved one from the UPS shooting in SF was so motivated to fight against any pro-gun candidates that she wrote hundreds of postcards while grieving her terrible loss. We hosted phonebanks and partnered with Democracy Action to make early calls, and sent tens of thousands of text messages to turn out the vote. Folks from SF even travelled to Virginia in order to canvas for Lee’s campaign. 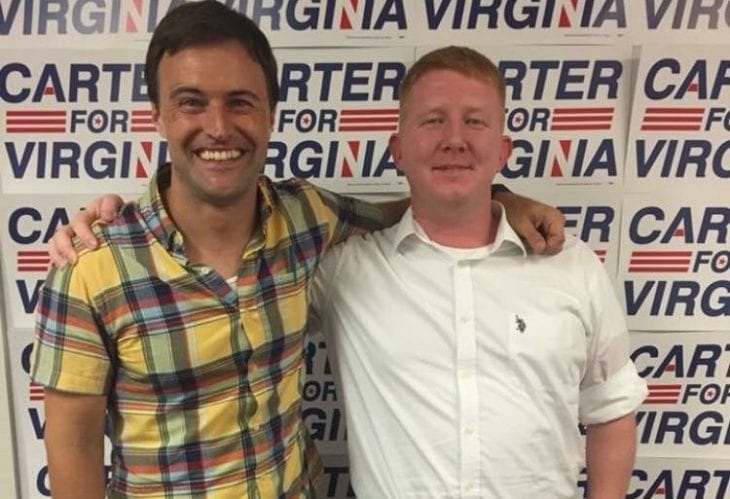 The whole time we were doing this, we wondered if what we were doing was in vain. We watched helplessly as Jackson Miller raised 3 times as much cash as Lee Carter. As we looked at the list of donors (all transparently listed on Virginia’s Public Access website), we noticed that the majority of Miller’s donors were real estate, insurance, and energy companies. Carter had thousands of individual donations, while Miller had a few hundred. The disparity in funds was growing rapidly as we approached election day, and Miller started paying for ads that compared Lee to Stalin. Then, a bombshell article came out declaring that the Democratic Party had officially dropped their support of Lee Carter. We were crestfallen. After a moment of wondering how we should react, we issued an SOS to our volunteers asking them to donate just a little more to Lee’s campaign.

This whole time, Lee wasn’t worried. From the beginning, he told us that while money was important, money wasn’t everything. When we heard from volunteers on the ground that Miller had outmatched Lee with yard signs, Lee said that he thought Miller was over-prioritizing yard signs and that door to door canvassing was much more effective. He told us stories of knocking on the doors of voters with Trump stickers on their trucks, who pledged to vote for him, noting that in the past decade Miller had not stopped by their door once. Lee believed that his message and his campaign would shine brighter on election day.

So, on Tuesday night when the San Francisco chapter of Sister District gathered to watch the election results, we were a little nervous. We were nervous because we were part of a new group, politically organizing for the first time for tiny state races (to which Democrats have historically not given much attention). So many had made such a huge personal investment in working to get out the vote (GOTV) and fundraise for these “sister races.” And we honestly e didn’t know if any of this was going to work.

Were the “good guys” going to win this time?

Lee Carter: Let's Get Out the Vote!

"With your help, we can send a message not just to Virginia but to the entire country that what happened in 2016 is not who we are and it's not the way it's going to stay." Lee J. Carter chats with our super-volunteer Alex Liu, who traveled all the way from San Francisco to knock doors in Virginia!Election Day is TOMORROW! There's still more you can do to help Lee's race: www.facebook.com/leecarterVA

If you’re reading this, then you know: they did. What we worked so hard to do WORKED! We won, and we won big!

When all the counting was done, we realized that Sister District Project, as a national organization, raised over 21% of Lee Carter’s total cash budget. Along with partners on the ground in Virginia and Lee’s amazing local grassroots volunteer team, we DOUBLED the democratic voter turnout from the last state election in 2015.

We were over the moon when it was announced that Lee, along with almost all of the 14 candidates that Sister District supported in the House of Delegates, had won. (13 of our candidates won, and one, Shelly Simonds, is in the midst of a recount effort after losing by 12 votes.)

We obviously can’t take all of the credit for Lee’s win. The most important people, ultimately, were the folks who voted in the VA-50 House of Delegates election. And, of course, Lee’s own courage in running for political office, the hard work of his wife and campaign staff, and the other major donors for Carter’s campaign were instrumental in securing the win. As Lee himself said in a recent interview with Jacobin, a big part of his success was due to having the support of a large section of the Democratic Party’s actual base.

However, we CAN take credit for getting involved, especially in state elections, which had been ignored for so long by Democrats. Republicans have historically donated 4 times as much as Democrats to state elections, and they managed to steal almost 1,000 state legislature seats in the last decade. We said, “Not this time.” And, we won. As we look forward to the road ahead, we have to remind ourselves that the path to victory is a marathon and not a sprint, but winning sure does taste sweet!