On June 27, the Supreme Court put its thumb on the scale to permit partisan gerrymandering and help Republicans stay in power for the next decade. In a 5-4 decision, the Court gave politicians the green light to draw voting district lines for partisan purposes, allowing those in power to choose their voters rather than the other way around. With redistricting right around the corner, it is a devastating blow to our democracy.

The catastrophic ramifications of partisan gerrymandering are already hijacking our democracy. In 2012, the election that followed the last redistricting cycle, Democratic candidates received a nationwide plurality of more than 1.4 million votes in all House elections, yet Republicans came out with a 33-seat advantage in the chamber. And in 2018, while Democrats finally flipped the House, Republicans held on to 16 seats that otherwise would have flipped because of the crooked maps they put into place after the last census.

Many of our 2019 candidates know firsthand how partisan gerrymandering can shift the balance of power dramatically. In Virginia, district boundaries have been controversial for years, and both Congressional and state legislative district lines have been held unconstitutional by federal courts due to racial gerrymandering. Congressional districts were redrawn by court order in 2016, which increased Democratic representation. These new maps will be used in the 2019 election.

If we don’t step up now by electing more Democrats to state legislatures this election cycle, we will have to wait until 2031 for our next chance at fairly drawn districts. You can help now by supporting our work to win strategic state legislative seats.

Here’s what some of our Virginia candidates are saying about gerrymandering:

Gerrymandering is the issue that first got Wendy out of her chair at a town hall back in February 2017. As a 19-year resident of the district, she has watched its lines be contorted and redrawn.

“I believe that free and fair elections are tenets of our democracy. Voters should be choosing their politicians instead of politicians choosing their voters. I have supported a constitutional amendment in Virginia to ensure that district lines are not drawn to favor any individual or political party. Furthermore, she firmly opposes any effort to make voting harder — and is appalled by Virginia House Republicans efforts to require photo identification for absentee ballots and multiple forms of state identifications at the voting booth.”

“Currently, elected representatives can choose their voters rather than voters choosing their representatives. I support an independent commission as the best route to provide voters with districts that are compact, contiguous, and fairly drawn.”

“If the 2017 elections taught us anything, it’s that gerrymandering and split-precinct voting make elections unfair and undemocratic. Let’s end these confusing, rigged elections. We need third-party redistricting, automatic voter registration, and no split-precincts.”

“We have seen threats to our democracy across the country which we must combat on all levels, federal, state and local! We must and as District 94 Representative, I will relentlessly pursue the preservation of our democracy by championing an independent commission to create fair districts for both Federal and State District boundaries which will be set in 2021.” 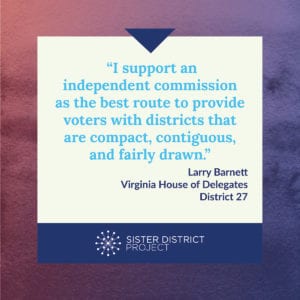 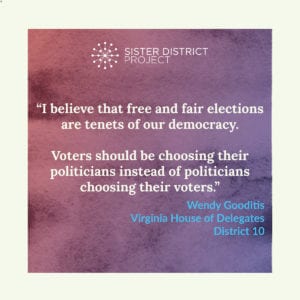 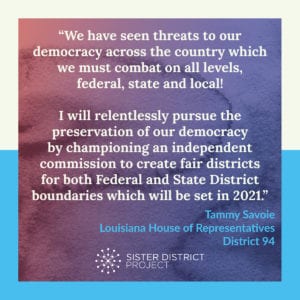 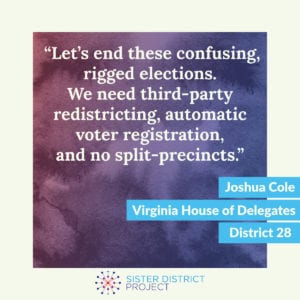