Handwritten postcarding is a popular volunteer activity, but research about its efficacy in boosting turnout has been mixed. This study investigated handwritten postcards as a GOTV tactic in general, as well as whether the postmark location affected turnout. Campaigns and advocacy organizations often ask volunteers to handwrite postcards to voters and to mail them in bulk back to the campaign or organization to mail to targeted voters locally. If postmark location does not influence postcard efficacy, this extra step for volunteers costs thousands of dollars a year that could perhaps be better spent elsewhere. However, if postmark location does influence postcard efficacy, then it’s important to understand the magnitude of its effect so that campaigns and organizations can make more data-driven spending decisions.

SDAN generated a list of registered voters in a number of competitive state legislative districts in North Carolina and Texas who had TargetSmart partisanship scores of 80+, indicating a high likelihood of voting for Democrats, and TargetSmart primary voter turnout propensity scores between 25-60, indicating low-mid likelihood of voting in the primary election. Each list was randomized and the first 15,000 voters on each state’s lists were chosen as subjects. These subjects were then randomized into 3 conditions: control (no postcard), in-state (received a postcard sent from inside the target state the voter is registered in), and out of state (received a postcard sent from outside the target state). This resulted in a total sample of 30,000 voters. Sister District volunteers hand wrote informational, nonpartisan GOTV postcards to the voters assigned to the treatment conditions. Volunteers writing postcards for the in-state condition mailed to in-state partners on February 18, 2020 and were mailed locally by in-state partners on February 22, 2020. Volunteers writing postcards for the out of state condition mailed from their location outside of the target state on February 20, 2020. It is assumed that all postcards reached voter mailboxes from February 24-26, 2020.

1) Receiving a postcard made people more likely to vote. 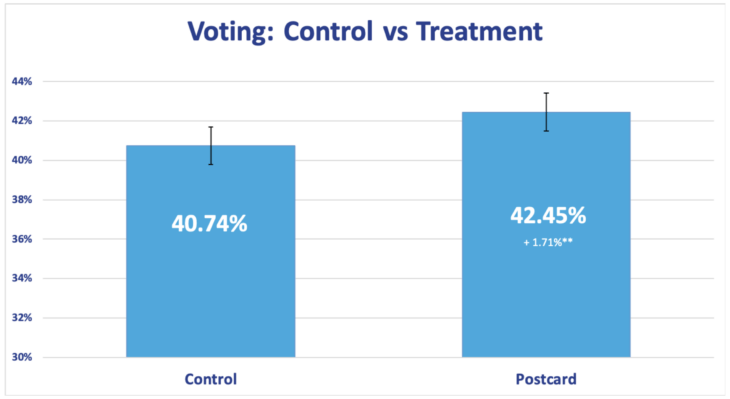 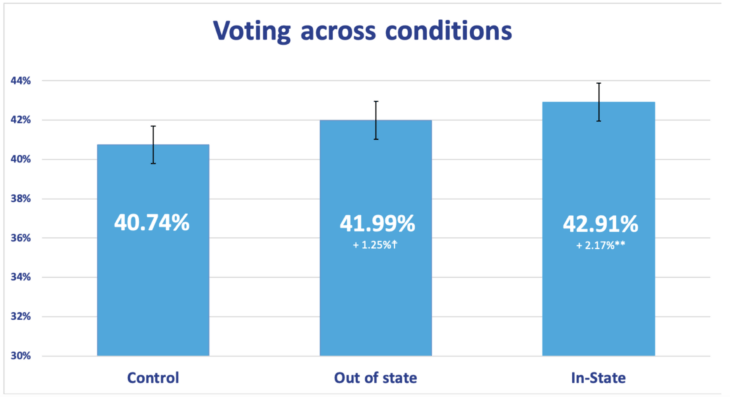 3) But when we directly tested the difference between receiving an in-state postcard vs. an out of state postcard, that difference was not statistically significant (p=0.328).

When directly comparing the turnout in the in- and out of state conditions (instead of to the control condition that received no postcard), the p-value indicates that the difference between the two treatment groups is not large enough to be statistically significant in this test (p = 0.328). This indicates that the increased efficacy from sending postcards in-state, as opposed to from out of the state, is not so different in effect size that the difference is statistically meaningful. However, this particular test was underpowered, and in a larger sample size, we may have been able to detect a significant effect. This suggests that we aren’t able to draw conclusions about the increased efficacy of in-state postcards.

This study helps to clarify how effective GOTV postcards are in motivating low-mid propensity Democratic leaning voters to vote in a presidential primary election. The results suggest that primaries may be particularly useful times to postcard, as our previous postcarding results undertaken during the general cycle reveal smaller effect sizes than those revealed in this study. Further, this study tested the assumption that sending postcards to voters locally is superior to sending postcards to voters from other areas. The results provide some evidence that this may be the case (the larger effect size and statistical significance compared to the control condition), but also that this boost may not be significantly different from postcards sent from out of state (the non-significant direct comparison in efficacy between the two treatment conditions). This study would benefit from replication to clarify the relative efficacy of the two treatment conditions, but initial evidence suggests that sending postcards locally may provide a small, statistically nonsignificant boost.