Background: Text messaging has become a popular political tactic in recent elections, and a good amount of industry research has tested messaging, timing, and warmth of contact (warm contacts are people who gave the organization their information with the knowledge they may be contacted). Less is known about whether text messaging efficacy may vary by the presumed race or regional location of the recipient. Further, industry research generally suggests that GOTV messaging should be information-forward and should minimize persuasion about candidates and parties. However, persuasion messages generally do not focus on why the act of voting itself is important. This study sought to look at the effect of GOTV texting in a relatively high profile odd-year election among Black / African-American low propensity voters, and further, to test if using persuasion messaging around the act of voting itself may boost turnout.

Specifics: SDAN ran this study with MS NAACP. MS NAACP generated a list of registered voters in almost all state legislative districts in Mississippi who were considered non-white, low propensity voters. SDAN matched that list to the TargetSmart voter file to obtain cell phone numbers for as many targets as possible. “Low propensity” voters were defined as voters who had a turnout score of 75 or below for off year elections, who voted in 2016 but not since, who were newly registered, or who had voted in 2008 and 2018 but not in the elections between those years. Further, voters needed to have a cell phone number listed to be included in the sample. This yielded a list of 31,844 voters. The list was randomized and subjects were randomly assigned to two conditions: Control (no text message) and GOTV text (received a text message). MS NAACP volunteers and staff send text messages to people in the GOTV text condition on November 3, 2019.

While sending the messages, the texting platform suggested that a shorter message would increase response rates. As a result, MS NAACP switched to a shorter message that did not include persuasion content. This was not a planned experimental factor, meaning results are exploratory and cannot be generalized, as people were not randomly assigned to conditions, but it does allow for analyses comparing the efficacy of the two different messages.  See Appendix for the text of the messages sent.

It is important to note that 465 people assigned to be text messaged were unable to be messaged for various reasons (e.g., because the number is disconnected, the number was accidentally changed in a record, the number is actually a landline or fax machine and can’t be text messaged, etc). This put 16,387 people in the no message control group in the message type exploratory analysis, while there are only 15,922 people assigned to the no message control condition.

1) Receiving a text message made people less likely to vote. Voters assigned to the text message condition were less likely to vote in the 2019 general election than voters who did not receive text messages. However, this result was not statistically significant (p = 0.121). This indicates that being assigned to the texting condition had no significant effect on voters’ behavior, although, in practice, was associated with decreased voter turnout compared to the control condition. 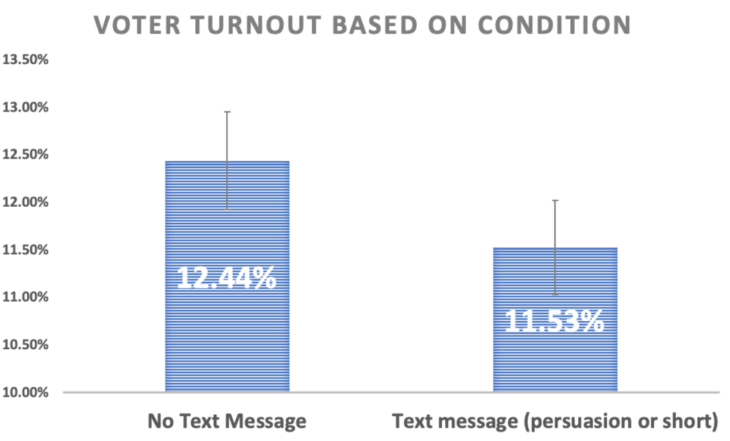