The Case: Rucho v. Common Cause

At the very end of its term in June, the Supreme Court ruled that the constitution does not prohibit partisan gerrymandering. The case, Rucho v. Common Cause, will loom large as we move towards critical state elections in Virginia this year and in key chambers all over the country in 2020. While this decision was both disappointing and wrongheaded, progressives can still make an impact in the 2021 redistricting process. There are several tactics to consider, but by far the most compelling route for addressing partisan gerrymandering is to win control of state legislatures.

One way to affect change is through litigation. Even without federal protection, we can sue for compliance under state laws and constitutions. Democrats in Pennsylvania and North Carolina have successfully litigated against partisan gerrymandering under state law. Racial gerrymandering cases are also still theoretically viable, though with Rucho on the books, these are now likely to be cloaked in partisan rationale. The success of litigation will depend on the protections provided by each state’s laws and constitution, as well as the composition of each state’s supreme court. But even where there are favorable laws on the books, litigation is extremely slow, wildly expensive, and is not a good way to make policy—it should be a backstop, not a substitute legislator.

Another option is to go straight to the voters through ballot initiatives. In 2018, Michigan voters approved a constitutional amendment requiring an independent redistricting commission. But only 26 states allow for a voter initiative. Additionally, campaigns to pass these initiatives are expensive, and will almost always be subject to legal and political challenges that contravene the will of the voters. For example, voters in Michigan approved an independent redistricting commission with 61%, but Republicans in control of the state legislature are using the budgetary process to underfund the independent commission and make it dysfunctional. Again, while the ballot initiative process is an option and should be used when necessary, it provides a tenuous path to fair districting.

The most effective way to undo the effects of partisan gerrymandering is to win control of state legislatures.

In 34 states, it is the party in control of the state legislature that controls the redistricting process. It is true that the governors, state supreme courts, and secretaries of state all play an important role, but the state legislatures create the maps and give us the best chance for fairness from the start. State legislatures can also pass laws eliminating onerous voter ID requirements, allowing for automatic voter registration, and ensuring that election security measures are in place and funded. The most opportunity for the broadest and highest-impact gains in time for 2021 is in state legislatures.

We started Sister District in 2016 as a response to the drastic effects of Republican gerrymandering, which has kept the majority of voters from having a majority of electoral power both nationally and in states. In 2016, North Carolina went for Donald Trump with 49.7% of the vote, less than half. That same year, they elected a Democratic governor. Yet Republicans came out with 10 of 13 congressional seats. In Michigan, voters went for Trump with 47.3%, again less than half, yet Republicans came out with 9 of 14 congressional seats. Republicans have parsed Austin, Texas, a blue stronghold, into five different congressional districts, only one of which is held by a Democrat. This manipulation of voters is happening all across the country, and it is resulting in vast swaths of votes being undercounted–or not counted at all. But we can change all of this by winning back power in state legislatures to ensure fair redistricting in 2021. 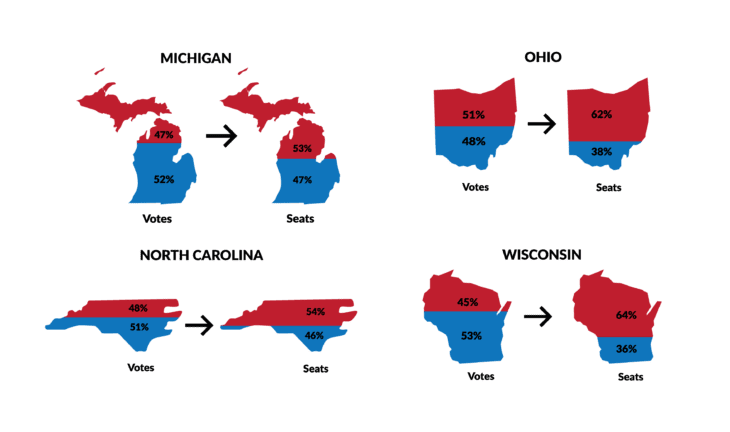 In addition to having high strategic value, state legislative races are disproportionately low cost, giving a high return on investment. These races generally cost hundreds of thousands of dollars, compared to the millions or tens of millions for a congressional or senate seat. This allows ordinary people—and a group like Sister District—to have an outsized impact. In 2018, Sister District’s average raise was 12% of each campaign’s total cash contributions.

No federal legislation is going to get through for the foreseeable future. The Supreme Court is quickly devolving to an entity that no longer recognizes or enforces federal rights. And while the presidential race is going to be the most consequential in modern history, the winner of that race will have no ability to address fair districting without Congress. Focusing on building power from the ground up is the best way to affect change right now, and that means winning power in the states.