A lot of folks are curious if phonebanking is worth the energy — particularly compared to postcarding, which is somewhat easier and sometimes more fun. Here’s the bottom line: phonebanking is worth the energy, and we’ve got to do it. It’s not always the most fun, but as Obama said recently, “We shouldn’t expect (politics) to be entertaining all the time… Sometimes you are just in a church basement making phone calls and eating cold pizza.” 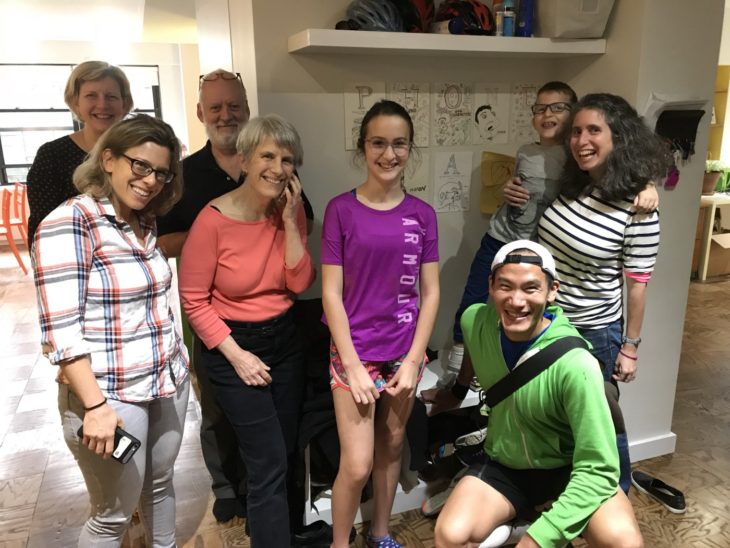 1. Besides canvassing, phonebanking is the most effective way to clean lists and identify voters

Here’s some background on how campaigns build their ‘universe’ of voters in the district who they want to eventually turn out to vote for their candidate. When a campaign starts up, it requests access to VAN from the state Democratic party. VAN is a big database of people who live in the district (or, at least, who lived there at the time of the last election). VAN has information about how frequently those folks voted in the past, and in which party’s primary elections they’ve previously voted.

It is the campaign’s job to then take that big mess of data and figure out which people still even live in the district (this is “cleaning” the list), and which people the campaign should target for which purposes (this is the process of “identifying voters”). VAN isn’t always up to date, because a lot of the data in VAN is from the last election. Not everyone who lived in the district a couple years ago will be there now. And, since voters do not register by party affiliation in some states (e.g. Virginia), VAN might not have this info ready to go either. So, the list needs to be “cleaned.” And, aside from knocking on people’s doors, the best way to do this is by calling them on the phone.

As the lists are cleaned, campaigns will start by determining which people have a very high likelihood to vote for the candidate already (their base), who probably don’t need too much attention from the campaign. Campaigns will frequently reach out to those folks as potential campaign volunteers. The campaign then determines two different segments of voters: those who need to be persuaded (consistent voters who may vote for either party’s candidate) and those who need to be mobilized (voters who generally will vote for a Democrat but who don’t always vote). Those folks will need to be persuaded to vote for the candidate or convinced to turn out, through canvassing, phone-banking, and other live conversations. These pools of potential targets make up the campaign’s “voter universe.” By segmenting people into these categories, campaigns can best allocate their time and resources to win their votes.

But again, campaigns can only do this to the extent that they have cleaned their lists, and identified and categorized those potential voters. Remember, a campaign doesn’t just get a list of categorized voters who are sure to live in the district from the state party or from anyone else. Each campaign has to build and clean their own list themselves.

Phonebanking is a key mechanism to clean lists.

So, phonebanking has a really important purpose waaayyyy ahead of calling folks to get out the vote — phonebanking is a key mechanism to clean lists (figure out who still lives there), and to identify and categorize voters (into base, persuadables, and mobilization). The eventual product of this process is the list that serves as the “GOTV universe” — in other words, just those folks that the campaign wants to try to get to the polls. Phonebanking is — along with canvassing — the only real way to clean lists and prepare that GOTV universe list. So, phonebanking is extremely important, including earlier on in the cycle.

It’s worth restating that, if we don’t help make these phonebank dials, they might not get done at all. And those are important voter IDs that may just go totally undiscovered for the campaign. The lists may just remain ‘dirty’ at the end of the campaign heading into GOTV — and that will hinder our campaigns too, in terms of not knowing everyone they should focus on turning out. Keep in mind that, typically in a midterm year, the state party’s responsibility is to turn out the base during GOTV; it’s up to each individual campaign to turn out its mobilization and persuadable categories. If those IDs haven’t been made by state legislative campaigns themselves, through canvassing and phonebanking, the campaign will have flawed persuadables and mobilization lists, and as we all know (shout out to Shelly Simonds), missing out on even a few votes can be the difference between winning and losing at the state leg level.

2. Live phonebanking works to turn out the vote— at scale

So, we just discussed how useful phonebanking is ahead of GOTV. But what about when the time comes to actually get out the vote — is phonebanking effective for that purpose too? It might not seem like phonebanking is effective when you’re doing it — after all, most people you’ll call don’t want to talk on the phone. But it’s important to remember that while phonebanking is definitely imperfect (canvassing is even better), it does work at scale. There is big value in phonebanking — at scale — across tens of thousands of dials. At a small scale it can seem ineffective, but at scale, it is pretty effective — when done by real live volunteers. Robocalls have been shown to be basically worthless and possibly even harmful. But phone calls by real people can increase turnout by approximately 2–3%. Canvassing is still king, at increasing turnout by approximately 4.3–4.8% of voters who answer the door. But phonebanking is still pretty darn good — in the aggregate, at scale. (PS — check out our research about the relative efficacy of different types of voter contact methods.)

As explained above, ‘cleaning your list’ and identifying the universe of voters you want to persuade, and then turning out voters in November, is an absolutely critical process that all campaigns do individually. Postcarding is probably most valuable for GOTV, or for other specific contexts (e.g., building name recognition in hard to canvass locations like apartment buildings) once a campaign has already identified and categorized its universe of potential voters. But there is simply no way that postcarding can help a campaign identify potential voters or clean its lists, because postcards are a one-way communication.

4. Postcarding isn’t yet proven to be very effective at turning out the vote — but it’s good for volunteer community building

Lack of Data for Postcarding

More generally, there really aren’t very good data so far about the effect of postcarding on turning out the vote. We are working on some exciting GOTV experiments using postcarding too, so we’ll have data on that after the election, when we get the voter file back (probably Feb 2019). But we caution folks to look carefully at the studies currently floating around about the effects of postcarding on GOTV. Many studies are not well designed, often because they don’t hold out a control group, or do not meet statistical significance in their results.

On a positive note, another thing to remember about postcarding is that there are two outcomes we ought to care about in the context of whether postcarding “works” — 1) turning out people to vote, and 2) community/teambuilding through the activity of postcarding. We’ll have to continue to find data to support 1), but there’s absolutely no doubt in our minds that postcarding is a huge winner when it comes to helping build our community of volunteers, which is also extremely important!

5. Do a mix of activities for maximum impact

Phonebanking is important, and is a central way that we can help campaigns throughout the cycle, particularly remotely. Postcarding is fun and builds community, but it won’t clean lists or identify voters for our campaigns. We’d like to encourage our volunteers to do a mix of the easy and the hard stuff this cycle. If we each do a little of both, we can have lots of fun, provide huge value to our candidates, and help flip red to blue this year!