Virginia has a special place in my heart. I have family in Northern Virginia, Virginia Beach, Roanoke, and Williamsburg. I’ve spent many happy hours racing boats on the Chesapeake Bay (in my spare time, I’m a competitive sailor). I have criss-crossed the entire state, from the pony swim on Chincoteague Island to the dogwoods blooming on the Blue Ridge Parkway to the Civil War battlefields of Manassas.

And in 2017, I poured all the outrage, despair, and fury I felt over Donald Trump’s election into flipping Virginia’s House of Delegates blue. We came breathtakingly close.

By September of 2017, my co-founders Rita, Lala, Gaby, and I had all taken a massive leap of faith and quit our jobs to be with Sister District full time. We were operating on a thin sliver of shoestring; sharing beds and sleeping on couches, eating at drive-thrus, calling in favors from every friend or family member we could think of.

Lala, Gaby, and I were on the ground in Virginia the weekend before Election Day, and we were determined to personally knock doors for as many Sister District candidates as we could manage (I think we only missed one). We were so enthusiastic that we asked every campaign to give us their “hardest” walk packet – inconvenient neighborhoods, poor signage, partially completed packets, and so on.

That Friday, we canvassed for Shelly Simonds. It was an unseasonably warm day in Newport News, and the turf we had was frustrating; the hours wore on and we decided to end early and head to lunch. We left maybe 20 houses untouched.

A few days later, Shelly’s race was a dead tie and went directly into a recount, which ended in a loss as her opponent’s name was pulled from a bowl. We were heartbroken, and couldn’t help but wonder… If we had stuck it out, could we have reached the two voters who would have put Shelly over the finish line?

This is our last chance to get voters to the polls

This year, we’re leaving no stone unturned. I spent last weekend in Virginia Beach, canvassing for our candidates Cheryl Turpin, Alex Askew, and Karen Mallard. The energy on the ground was electric as Sister District volunteers joined college students, union members, local community members, and activists from across the state filled the campaign offices, eager to knock doors for these critical candidates. And, candidates from safe districts came out to support these precarious races – Sister District alumna and current Delegate Jennifer Carroll Foy, Delegate Lashrecse Aird from Richmond, and local politicians all helped launch canvassing shifts for our candidates. 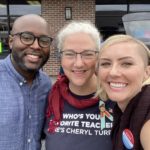 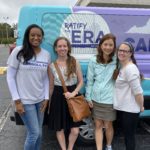 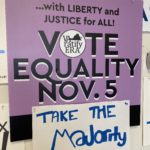 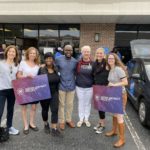 Knocking doors in Virginia Beach again had me reflecting on how far we’ve come in the last two years. In a poignant bit of symmetry, Cheryl Turpin has the same campaign manager this year as she did in 2017. We laughed and reminisced about the same time two years ago, when we spent a memorable afternoon shaking “VOTE!” signs on the corner of a major intersection.

In the last two years, we’ve grown exponentially. We have over 45,000 volunteers comprising 90 teams and affiliates, staff with deep campaign experience, and partnerships with the biggest organizations in the space. To date, we’ve raised over $1.7M for candidates and reached out to over 1.5M voters. (I’m still crashing with relatives though, at least when I’m in Virginia Beach – my aunt would kill me if I didn’t!)

This year, the stakes couldn’t be higher; not just for the issues Virginians care about, but also because it’s our chance to send a message to both sides in the 2020 race: we’re here, we’re organized, and we’re ready to pour our hearts and souls into taking our country back.

I know that together, we can finish what we started in Virginia. Join me and thousands of Sister District volunteers in making phone calls, knocking doors, and donating last-minute cash. Let’s leave it all on the field.