When I started Sister District on my living room couch in 2016, I thought only a few of my wonky neighbors in California would care about building Democratic power by flipping state legislative chambers. I created a simple web page with my idea for matching deep blue districts with purple ones that needed help, I assumed it wouldn’t go much farther than that.

I couldn’t have been more wrong.

Within a few short months, I had four co-founders (Candis, Gaby, Lala, and Lyzz) ready to change the course of their careers with me. And most importantly, tens of thousands of Sister District volunteers stepped up — volunteers who believed so strongly in the urgency of restoring Democratic power at the state level that they were willing to spend their nights, weekends, and hard-earned dollars working on small campaigns in faraway states.

The 2017 Election in Virginia

We got straight to work on the general election in Virginia, but the entrenched Republican majority seemed nearly impossible to overcome. Years of heavy gerrymandering meant Republicans still maintained a stranglehold on the legislature, even though every statewide office was held by a Democrat.

Imagine my shock less than one year later, when we shattered every expectation on Election Night and came within a razor’s edge of flipping the Virginia House of Delegates blue. 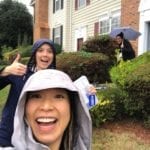 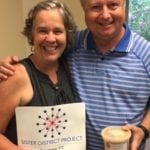 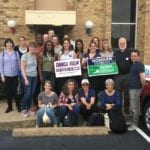 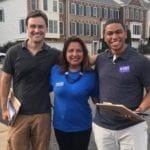 That night we sent a message to Donald Trump that echoed across the nation: by rolling up our sleeves and working together, we can take our democracy back. I will never forget how it felt.

Fast forward two years later, and we are back in Virginia. The Commonwealth will have state legislative elections for their Senate and House of Delegates in just a few weeks, and Democrats are poised to flip both chambers blue and turn Virginia into a Democratic trifecta state.

If we succeed, it will be nothing short of monumental, but it did not happen on its own. In fact, just two years ago, this did not even seem possible. The story of Virginia is still being written, but it offers a roadmap on what we must do to turn a state from red to blue.

Help us flip states from red to blue.

In many respects, Virginia should be a blue state. It has a Democratic governor and two Democratic senators. It went for the Democratic presidential candidate in the last three election cycles (Obama 2008, Obama 2012, and Clinton 2016). And yet in 2016, the same year that it went for Hillary Clinton by five points, 7 of the 11 Congressional seats in Virginia went to Republicans. This is because Republicans control both chambers of the state legislature, and they had gerrymandered their legislative districts to give themselves an advantage not only in their state senate and house of delegates but also in Congress.

Indeed, Republicans had done such a “good job” gerrymandering their districts that Democrats only held 34 of 100 seats in the House of Delegates in 2016. However, every one of those seats was up for election in 2017. Sister District, along with many others, mobilized to support races in Virginia and chip away at the Republican majority. We fundraised, made phone calls, knocked on doors, and sent postcards to voters. And with the help of this robust grassroots effort, on election day in 2017, Democrats succeeded doing what nobody predicted—they flipped an unprecedented 15 seats and came within 1 seat of flipping the entire chamber.

Gaining power means gaining leverage. Despite not controlling the legislature, Democrats got the Republicans to agree to expand Medicaid because it was clear voters were responding to Democrats messages on healthcare. Equally as important, with so many gains in 2017, Democrats are now in a position to finish the job and win the seats needed to flip both the House of Delegates and the Senate in the upcoming 2019 election.

The work we are doing to help Democrats win in Virginia could not be more urgent. After the tragic shooting in Virginia Beach earlier this year, Governor Northam called a special legislative session to address gun violence. The Republican-led legislature adjourned after just 90 minutes with no action. Less than 2 months later, the NRA gave $200,000 to a Republican PAC in Virginia. We must break the stranglehold that the Republicans and their special interests have on the majority of voters in Virginia, and the only way to do it is to win these seats.

Change does not happen overnight, and it also does not happen on its own. It takes multiple election cycles, constant vigilance, and most importantly, year-round action. But it is possible.

In the short span of just two years, turning Virginia blue has gone from being a faint hope to a stone cold reality. If it happens, it will be because you cared, you took action, and you did not let up.

Let’s finish the job in Virginia this year, and then let’s do it everywhere else.