Diane Shamas is a District Co-Captain, Soup Maker, and Postcard Potluck Host for SDP’s Southern Vermont team. She organizes volunteers who advocate for children and families. She loves to make things by hand, go places on foot and take on projects with small groups of reasonable people.

Geoff Burgess is a college administrator and an avid bicyclist. He recently celebrated the birth of his first grandchild. 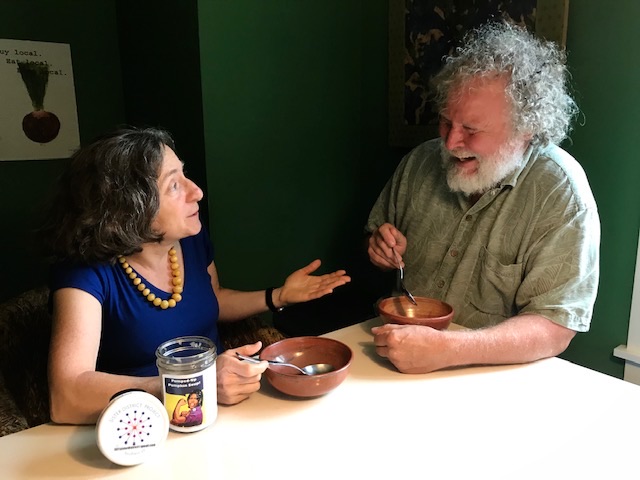 Diane: Hi Geoff. I got involved with Sister District after the 2016 election when I was looking for a way to feel useful and a bit more empowered. Although I had been wary of getting involved in another state’s internal politics, Sister District’s thinking on the impact of gerrymandering and the need to work on the state level before we can succeed nationally made sense. We started to develop fundraising ideas based on things we already liked to do, in ways that would enhance local community as well as supporting our sister states. Initially, that was the Soup CSA which has now produced almost 1800 quarts and raised over $22,000 for Sister District Candidates! Save Our Nation Vacation came next.

Geoff: For me, it’s the “why” that brought me to Sister District. I like to think of myself as a reasonably politically aware person and a responsible media consumer. I follow the news and make donations to national and international organizations that forward my values. And I volunteer for local non-profits. But this approach only took me so far. Ultimately these efforts felt more about me than about the causes because nothing I did seemed to move the needle on, say, addressing climate change or reducing homelessness in my hometown. But when I learned of Sister District and of the focus on state legislatures, something clicked.

Diane: Absolutely, since we live in a blue part of a blue state, it can be difficult to increase your impact on national politics by advocating with local organizations or representatives. Sister District gives us a great opportunity to work locally but has a national impact. 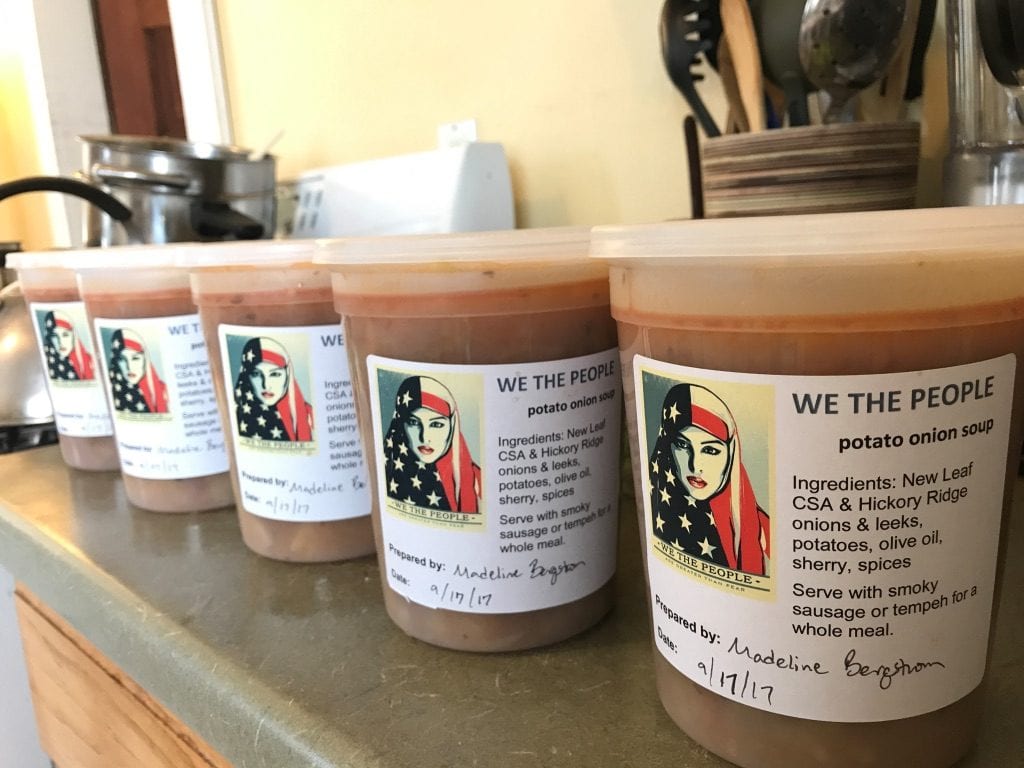 Geoff: Say a little more about what the Soup CSA is?

Diane: It’s pretty simple. We have volunteers who make soup once a month at home using a recipe we provide. Then we have subscribers who make a donation to a Sister District candidate and receive a quart of soup each month for four months. Any soup they don’t pick up or can’t use is donated to a local food shelf. So, we raise money and feed local families. I was the original soup recipe developer and chef organizer. Now I just make soup every other month.

Geoff: And I was/am a soup maker too. That was my introduction to Sister District.

Diane: And now you’re on the Save Our Nation Vacation team? How does that work?

Geoff: Well, sort-of like the soup subscription, which is a feel-good, community-based activity. We wondered about what other things people might enjoy, and well, everyone likes to vacation. We realized that a lot of money is spent there, mostly swallowed up by the travel industry. So, then the question became: What if some of that vacation money was diverted toward a good cause? Asking around, we discovered that a number of people had places – cottages, lake houses, outbuildings, etc. – the sort of thing that people might put up for AirBnB or other online rental services. We started asking these people, usually friends or friends of friends, if they might donate a weekend, a week of availability sometime over the coming year to Sister District.

Diane: Sounds more complicated than soup- what happened next?

Geoff: So, we collected offers of vacation locations, first a dozen and now up to twenty places, first mostly in the Northeast, and now across the U.S. (New Orleans, Idaho, California, etc.) and created a website called Save Our Nation Vacation that provided descriptions and images as well as a bidding procedure. The site was available for a month and we spread the word as widely as we could. Bids came in, we matched highest bidders with property owners, and then we let the bidder and owner work out the details with each other(when and how the vacation property would be used). Then – this is key – vacationers donated directly to Sister District. No money went to the property owners or through Southern Vermont Sister District.

Diane: How is it working out?

Diane: I got to go on a great weekend vacation in the Berkshires this spring at a Save Our Nation Vacation location. It was really fun and I knew my money was going to a good cause.

Geoff: This has been fun. It’s a win-win feeling for property owners and for vacationers. And community building. The work on the Save Our Nation Vacation auctions is purposely labor intensive. While it occurs online, it’s not about the software – all locations are found and posted by volunteers like me. Similarly, we facilitate all the communication during the auction and provide explicit updates. We deliberately want to foster a relationship with property owners and potential vacationers that is based on trust and community. It’s person-to-person and each participant is known to another participant. So, instead of dealing with some sort of “portal” where you enter data and navigate through a computerized system to try and randomly find a good match, you are dealing with people. And, importantly, they share your values!

Diane: I love taking my values on vacation! We’re a pretty small community but it feels like these two projects have allowed us to make a significant impact while we get to know our neighbors better and have a good time. And we always build in time to sit down together to share a good meal and celebrate. It’s been uplifting work in difficult times.