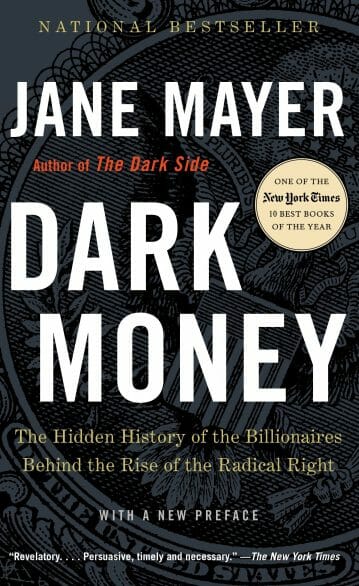 DARK MONEY: The Hidden History of the Billionaires Behind the Rise of the Radical Right (2016) by Jane Mayer

Check out the Fireside Chat between Dr. Gaby Goldstein and DARK MONEY Documentary Director, Kimberly Reed! They discuss Jane Mayer’s book, Reed’s documentary, how wealth is used to corrupt or manipulate the democratic process, and how that impacts both voters and communities.

If you haven’t joined, please sign up here to vote on future books and keep in the loop with regard to book club events and information!

Our current book selection is Dark Money by Jane Mayer.  This reader’s guide provides: A) main themes of the book; B) discussion questions; and C) facilitator’s guide for folks who will be leading book discussions in person (highly recommended!).

SDAN is affiliated with the Sister District Project, but it is a separate legal entity.