6 Ways You Can Help Get Out the Vote

There’s nothing like being on the ground on Election Day.

You can feel the energy, excitement, and nervousness of people like you who have poured their hearts into these campaigns. These short and most important days are when races are won and lost and as we saw in 2017, every single vote matters and can be the difference.

In 2017, we came one vote away from flipping the Virginia House of Delegates from a Republican majority to an even split where the Democratic Lt. Governor would break the ties. Despite that single “loss,” the dozen other victories that we had, helped tip the balance in the Virginia Legislature and allowed them to pass legislation which expanded Medicaid to over 400,000 Virginians, that’s a huge impact! A victory this year could lead to other big changes like the ratification of the Equal Rights Amendment! Also, with the census upcoming next year, this is our last shot to flip the Virginia House and Senate before they draw the district lines for the next decade.

GOTV is something that we constantly mention throughout the election cycle. It’s where all the work that we have been doing for months comes together. We’ve been trying to persuade and mobilize voters and now it’s our jobs to make sure that they get to the polls and vote for our candidate; it’s game time. During this four day process, a campaign aims to make several passes through their entire voter target universe. Here are six things that you can help lead our campaigns to victory during GOTV.

This is a form of voter contact that we’ve done massive amounts of over the last couple of years. Postcarding a really good tactic to reach voters who don’t answer their phones, have incorrect numbers in the voter file, and to get to voters who live in inaccessible places/houses like big apartment buildings or remote locations. The messaging in postcarding generally compliments the communication plan of the campaign and is an additional avenue to make an impactful, personal touch on a voter.

This is a newer tactic that continues to be more and more present in campaign field programs. It’s a very quick and easy way to reach a large number of voters through direct contact and in real-time. With people picking up their phones at rates that seem to be declining, especially among millennials, texting is an increasingly desirable way to contact voters to get voter IDs and communicate to voters.

Money is a major component in any campaign. While GOTV is at the end of the cycle, it’s also when each campaign will make their final push which is often the most expensive part of the election cycle. The campaigns will need late money to fund their field programs, Election Day workers, election attorneys, direct mail pieces to voters, paid media/communications (TV, Radio, digital ads), staff salaries, and other operational costs. You have the power through your networks and your team’s pages to find grassroots donors that will help the campaigns get through the finish line and have everything that they need to finish strong.

Ask: Use social media to crowdfund for your candidates during GOTV

Phonebanking is one of the most effective of voter contact strategies. Phonebanking during GOTV is about reactivating voters the campaign has already touched and in many cases letting the voter know where their polling location is!

GOTV is one of the best times to phonebank for the experience and also so effective in getting folks to vote early (if possible) or on election day itself.

Face-to-face conversations are the most effective tool for persuading voters. Nothing convinces a voter more than meeting a supporter or a candidate for themselves live and in person. If you are able, GOTV is the best time to help canvass and will give you the opportunity to meet voters and connect with the campaign like never before, and with the introduction of the SDP Canvass Travel Reimbursement program it becomes a little easier.

Last year SDP NFD Chris was able to canvass with volunteers from South Bay, CA in Colorado and they literally found themselves speaking to people, reminding them to get out and go vote. The best thing is when people say “oh I forgot, thank you” and literally walk to their neighborhood school or polling location to cast their ballot! Makes such a difference, especially in close elections.

1. Get Your Friends + Family Involved

Bringing friends to help really amplifies the volunteer impact. GOTV is the most exciting time for new volunteers to help out, and voter outreach is always more fun with friends.

Ask: Ask a friend to sign up with SDP today

Thank you all so much for your hard work so far and whether you’re going to join us in the campaign trail or will be actively working from somewhere else around the country, know that your work matters and that we can’t do it without you! 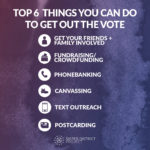 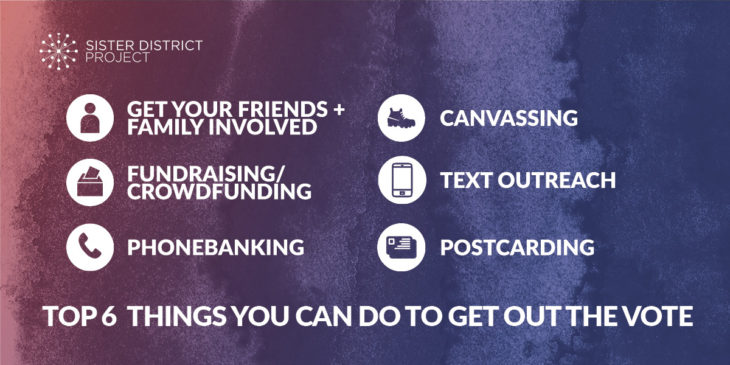