Sister District is proud to release our 2020 SDP Impact Report. This report summarizes our achievements in field and fundraising during the 2020 cycle, discusses the growth of our programs and volunteer teams/infrastructure, and the experiences/outcomes for the campaigns we supported. This blog highlights some of the major takeaways from this year’s report.

Four years after our organization’s founding, we are reflecting on the incredible progress of this organization. Despite obstacles—including gerrymandered maps, voter suppression, and a global pandemic—we made gains that will serve as the cornerstone of change for years to come.

Since our founding, we have engaged over 50,000 volunteers nationwide, raised $3.6 million for candidates, and made 3.1 million field touches. In 2020 alone, we raised an average of 9.7% of our candidates’ total fundraising and made 34.5% of candidates’ total phone calls, highlighting our capacity for outsized impact. We have flipped chambers blue, created Democratic trifectas, broken Republican supermajorities, and increased civic engagement to help implement independent redistricting commissions and elect progressive governors, supreme court justices, and of course, our next President and Vice President.

Quick Takes from an Impactful Year 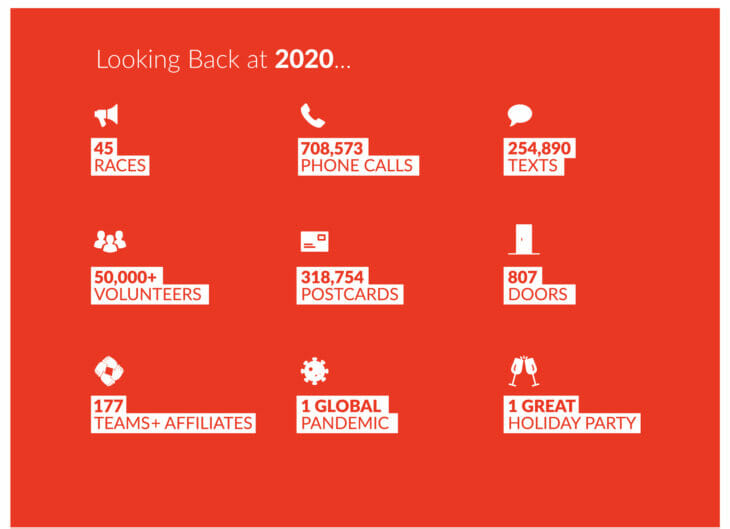 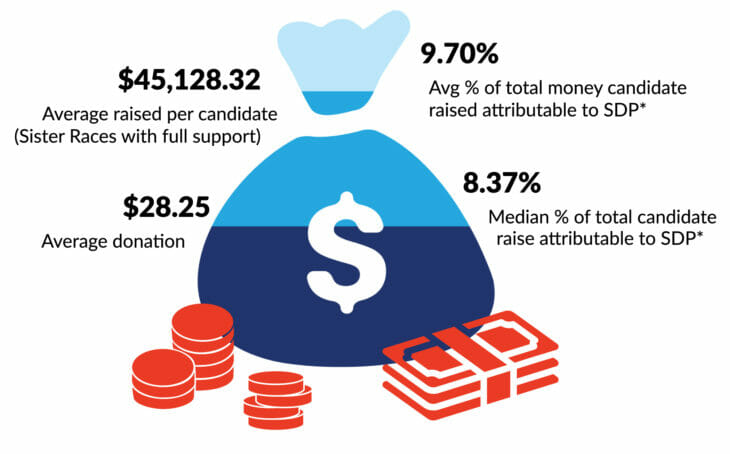 Phonebanking – Sister District volunteers dominated the phones this year and made a staggering 708,573 phone calls to voters on behalf of our 2020 candidates, donating approximately 28,343 hours of volunteer time. This incredible effort meant an increase of 65.05% in average per candidate phonebanking support over 2019, the previous record of phonecalls made by Sister District volunteers.

Fundraising – Sister District volunteers raised an amazing $1,833,155.88 to support our 2020 races. Because we endorsed more candidates in 2020 than in any other year, this meant that the average amount raised per Sister Race increased just slightly, going from $41,979.36 in 2019 to $45,128.32 in 2020. However, it allowed Sister District to support an additional 23 Sister Races, more than doubling the amount of Sister Races we were able to support in 2019 (17 Sister Races) while not compromising fundraising support. 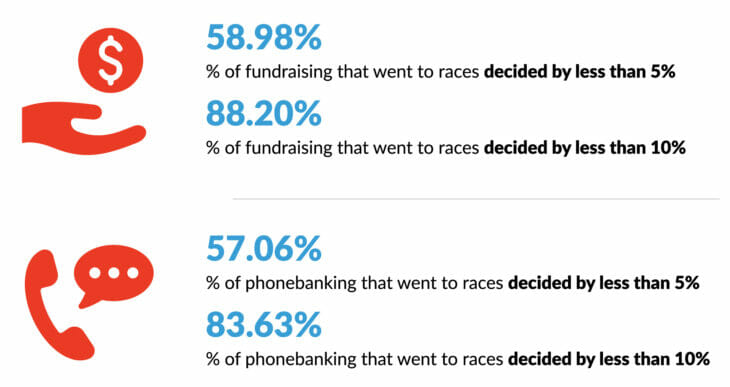 In our fourth election cycle as an organization, we were able to support a whopping 40 candidates with full field and fundraising support, more than 2.5 times the amount of candidates we supported during our first cycle in 2017. Even compared to 2018, when we supported our previous record amount of Sister Races (25), we supported 15 more Sister Races in 2020, an increase of 60%.

Several of our candidates won, and many gained ground in their districts to help allow future Democratic candidates to win.

Sister District considers increasing the representation of underrepresented groups in our state elected bodies to be one of its core missions. This includes but is not limited to women, people of color, and individuals who identify as LGBTQIA+. Of the Sister Race candidates endorsed in 2020:

Out of our 2020 endorsed candidates:

Our candidates and their staff continue to be extremely satisfied with Sister District’s fundraising and field support.

As they do every year, our candidates’ comments in the survey demonstrate how incredibly grateful they are for Sister District’s support and partnership. A selection of their comments is included in the full 2020 Impact Report.

The Political Department expanded our campaign services program in 2020, which was an enormous asset to our endorsed campaigns. Over the cycle, Sister District’s Political Department sent a weekly candidate newsletter highlighting candidate services and resources, completed over 60 specialized projects at campaigns’ requests, and held office hours to allow campaigns time to strategize with the Political staff one-on-one. On average, 67% of campaigns took advantage of the campaign services program.

In 2020, Sister District Organizing Department sought to continue to grow our number of allied affiliated teams and grow our leadership structure in terms of high level volunteer leaders. Both goals were met. We gained 81 new teams and affiliates across the nation, bringing our total to 182. We also gained 181 volunteer leaders, for a total of 482. This shows that our existing teams continue to develop their infrastructure for long term organizing. We are also deeply committed to building an inclusive organization and advancing racial justice in everything that we do; one of the steps we took this year was to establish a monthly virtual happy hour of BIPOC volunteers.

In 2020, the Sister District Organizing Department exceeded growth goals for our number of affiliated teams and the recruitment and development of new Volunteer Leaders. We gained 81 new teams and affiliates across the nation, bringing our total to 177, and added 181 new Volunteer Leaders, ending the cycle at 482. We are deeply committed, along with our volunteers, to building an inclusive organization and advancing racial justice in everything that we do; we exceeded goals for BIPOC Organizing Fellow hires (39.41%) and initiated an ongoing monthly virtual happy hour of BIPOC volunteers.

Volunteers are the energy that makes the Sister District machine run, so their feedback about our programs is vital. Our 2020 survey found that team satisfaction remains quite high.

Teams were highly satisfied with:

Volunteer Work in a Pandemic

The 2020 election cycle was complicated by the COVID-19 pandemic, which wreaked havoc with primary election dates, limited in-person volunteering, and jettisoned various field and fundraising plans. With the help of our Organizing Department, volunteers made the transition from in-person phonebanks, fundraisers, and meetings to online events seamlessly. The Organizing Department created tutorials and procedures to help volunteer leaders move events online and quickly ramp up their virtual organizing. Further, they provided support to 100% of Sister District teams to help them navigate the unique issues of completely remote volunteer work.

In 2020, the research program at Sister District Action Network (SDAN), the 501c(4) arm of Sister District Project, continued to grow. We conducted 11.11% more studies in 2020 than in 2019 and reported the results of 25% more studies in 2020 than in 2019. Further, we have expanded into qualitative and narrative research in order to investigate how non-experimental factors like race and gender may impact electoral outcomes.

Our research continues to add significant value in the areas of volunteer and voter engagement, as well as voter registration. For the second year in a row, we were honored that our research was selected for an Expy Award by the Analyst Institute, the country’s premier progressive research organization.

Finally, SDAN is expanding its reach in 2021, developing more civic engagement and alumni and legislator services programs to further educate the public about state legislative races and policy and support progressive state legislators.

Our Work Has a Measurable Impact

Sister District knows that, thanks to an incredible group of volunteers and our dedicated staff, we left it all on the field. Moving into 2021, we are eager to reflect on the gains we have made and continue to work together to flip seats and chambers blue across the nation!