Aleta Borrud grew up on the North Dakota Plains, where farmers brought in the harvests of their sick neighbors, and each child was everyone’s responsibility. After attending public high school in Minnesota, Aleta attended a private college where she encountered the kind of inherited wealth that defines future opportunities others can only dream of. This experience started her lifelong commitment to fighting for economic justice.

Her father, a family doctor with deep respect for every patient, inspired Aleta to pursue medical and public health school. After graduation, she returned to Minnesota to train at Mayo to be a physician specializing in the care of older patients. During her time as a hospitalist geriatrician, she used her public health training and population perspective to develop protocols to improve the safety of hospitalized patients. Retiring after practicing for 19 years, she has since worked to make healthcare accessible for everyone, particularly for our rural communities.

Throughout her life, Aleta has worked all kinds of jobs, an experience which has given her an appreciation for the value of all work and a belief that everyone deserves dignity and security. Over the past decade she has become a leader in organizations working for legislative changes to benefit working people and is a collaborator with many community groups and unions working for social change.

Aleta’s advocacy has given her a deep understanding of both policy and politics at the Minnesota legislature and has allowed her to develop extensive relationships with elected leaders and progressive organizations. She has the relationships and community connections necessary to build the coalitions essential to win this seat in District 26, a seat critical to flipping the Minnesota Senate and making meaningful change for all of Minnesota.

Healthcare Guarantee
As a doctor, Aleta has a core belief that every person has inherent dignity and deserves care. She has witnessed how gaps in insurance coverage can be devastating for people and their families. In this COVID-19 pandemic, many are losing medical insurance along with their jobs. As a solution, Aleta supports legislation to open access to Minnesota’s state insurance program so everyone has the security of healthcare. She wants everyone who goes to their clinic or hospital to be seen as equally deserving of access to quality healthcare, regardless what their wallet holds or what insurance they have.

Aleta also believes that guaranteeing essential healthcare services means all people have a right to gender appropriate care, regardless of gender identity. Government policy must not interfere with the private decisions made between patients and their medical providers. And women must have the right to make decisions affecting their own bodies.

Creating a Government that serves everyone
Minnesota used to lead in funding public education, healthcare for low-income residents, and moving to clean energy. However, false narratives have been promoted about fraud in public programs to justify disinvestment in the common good as our state diversified. Minnesota now is among the states with the highest racial disparities in income, wealth, and incarceration rates. Aleta believes that to create the future we all want and need-a healthy planet, educational opportunity, security of a home and healthcare-we must recognize that systems that privilege a few are strangling our democracy and denying services that benefit everyone. We all deserve the opportunity to create and share in Minnesota’s prosperity, regarding what we look like, how we pray, how we got here, or whomever we love.

Protecting Our Planet
We can put people to work building our future with the green energy solutions that exist. But we must bring people together to make policy change happen and to end the gridlock by politicians who block solutions to the climate crisis.

With a commitment of resources, Aleta believe our union workers should be building and retrofitting our public housing to achieve net emissions. We can support the ability of our small to mid-size farm to diversify and grow food for local needs while employing practices that store carbon in the soil. Minnesotans are known for their innovation and strong work ethic. She believes the state can use these strengths to build a greener future for our next generations.

Supporting Minnesota Farmers
Family farms are the backbone of rural communities. Yet many Minnesota farmers describe this period as one that could lead to small farm extinctions. With farms facing foreclosure or sale, Aleta supports programs such as Minnesota Farm Advocates and those to help refinance loans. She has long advocated for increasing access to affordable healthcare for farmers, as this is a main cause of foreclosures.

Aleta believes it is important to save our smaller farms from incorporation into the large absentee industrial operations that pollute, breed dangerous organisms resistant to antibiotics, and contribute to global warming. Supporting small and mid-size farms is essential to insuring rural communities have healthy food and clean air and water.

Ending the Public Health Emergency of Gun Violence
Guns are a leading cause of death among Minnesota’s teenagers and young adults. As a State Senator, Aleta will work to allocate research dollars to find the best solutions to this public health crisis. The majority of Minnesotans support taking steps to end this epidemic and support the steps gun safety advocates have proposed we take right now. These include enforcing existing gun safety laws, enacting universal background checks, and putting in place red flag laws. What the state needs is action from legislators, who have long chosen not to take action on common sense legislation.

Funding Public Schools to Prepare for our Future
Building our future economy starts with an investment in our public schools. Minnesota has fallen down from the top to #22 among states for investment in public education. Local school systems must increasingly rely on property taxes, which exacerbates existing education inequality between rich and poor, and disproportionately hurts farmers, retirees, and small business owners. Minnesota also has the highest disparities in the nation for outcomes of our indigenous students and students of color. While the Walz administration has taken steps to remedy some of these disparities, Minnesota public schools need additional resources. As State Senator, Aleta will fight to fully fund Minnesota’s public schools.

Aleta will also work to reduce the enormous burden of higher education loans so our young people can develop businesses, buy homes and start families.

The Minnesota Senate is our pick for the best Democratic chamber-flip opportunity of 2020. Democrats are down just 2 seats in this chamber, which has not been up since 2016. This means there are great districts that have trended towards Democrats since their last election, which are ripe for flipping this year.

Flipping this chamber would deliver a Democratic trifecta to the state of Minnesota, since Governor Tim Walz is a Democrat who is not up in 2020, and Democrats flipped the state house blue in 2018.

This is an independent expenditure prepared and paid for by the Sister District Project, Inc., 340 S. Lemon Ave, #8737, Walnut, CA 91789. It is not coordinated with or approved by any candidate nor is any candidate responsible for it. 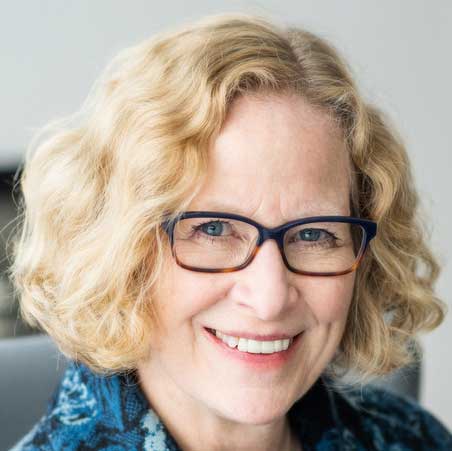 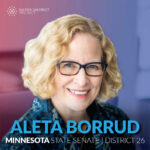