Delegate Turpin currently represents Virginia Beach in the 85th District of the Virginia House of Delegates. She has played a key role in bringing Medicaid Expansion to Virginia, increasing teacher pay, and giving struggling schools the resources they need. As a State Senator, she will keep fighting for education, healthcare and keeping our air and water clean.

Sister District endorsed Cheryl in 2017 where she defeated incumbent Rocky Holcomb (R) in the Virginia House of Delegates District 87 election.

Education
Cheryl Turpin is running to make a difference for our community – as she’s always done for her students. Turpin is a local public-school science teacher and state delegate. As senator, she will work to improve our public schools and invest in job training programs so students are trained for good paying jobs in our area.

Expansion
Turpin believes everyone should be able to afford to see a doctor when they’re sick. She helped bring Medicaid Expansion to Virginia. Now, hundreds of thousands more Virginians have access to affordable healthcare, including veterans, children, and working families who fall through the cracks.

Guns
Cheryl Turpin knows that our leaders in Richmond can do more to keep our communities and families safe. That’s why she supports common-sense reforms like expanding background checks to keep weapons away from the dangerously mentally ill and domestic abusers.

ERA
As the mother of two daughters, Turpin prioritizes equality. She stood up for the Equal Rights Amendment and believes women should receive equal pay for equal work. Turpin believes men and women are equal and won’t stop working until our state and U-S Constitution say so.

Choice
Turpin will stand up to reckless politicians who support forced trans-vaginal exams or want to turn away federal tax dollars that help get important healthcare to women, like cancer screenings and affordable birth control. Turpin trusts Virginia women to make their own healthcare decisions.

Hundreds of Virginians gather on beaches, saying ‘no’ to offshore drilling 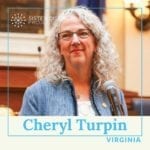