Jenn Alford-Teaster ran a challenging race in the 2018 midterms, and although she did not win, Sister District was proud to support her campaign. Read below for more about Jenn and why this race was important.

A New Hampshire native, Jenn was raised by her grandmother and mother in a small Seacoast apartment. They struggled just to put food on the table; eventually her mother had to accept welfare and food stamps to support her four children. It was an experience that deeply influenced Jenn’s commitment to easing the burdens on families in need.

She also knows how to make a little assistance go a long way. At 18, Jenn moved alone to North Carolina with two suitcases and $265, and found a job at a coffee shop where she worked for the next decade. There were weeks when she had to choose between buying food and paying utilities; but with the help of her employers, who encouraged her to apply for financial aid, Jenn enrolled in the University of North Carolina at Greensboro, where she earned her bachelor’s and master’s degrees and met her
future husband, Jason.

What Jenn learned about resilience and self-sufficiency during those years has fueled her commitment to public service. Back in her beloved New Hampshire, she and Jason have built thriving careers and bought a home where they are raising their daughter. But for Jenn, being comfortable is not enough, not when many families in her community are in trouble.

Through her church, Jenn spent six years volunteering at a community homeless shelter, seeing the opioid crisis from the front lines. She has led a committee to address emergency relief for local families and, recognizing the particular difficulties facing women, has developed legislation to promote equal pay for equal work. And she wants to do more. 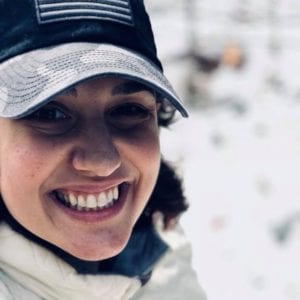