In 2017, Sister District helped Kathy get elected. She was part of the new cohort of Democrats who voted to give 400,000 people access to healthcare in Virginia, among many other accomplishments. We need to help her win again in 2019 so that we can finish the job and flip Virginia blue.

Kathy Tran and her parents fled Vietnam by boat as refugees when she was just seven months old. Although many other countries offered them asylum, they waited 13 months for the United States to accept their application. For Tran’s family, this country has always represented hope, opportunity and freedom. Now, she’s running for re-election to the House of Delegates because she couldn’t just stand by while Donald Trump and Virginia Republicans dismantle the ideals that brought her family here.

Tran began her civil service career at the U.S. Department of Labor’s Employment and Training Administration as a Presidential Management Fellow in 2003. During her 12 years of service, she served in numerous leadership positions, including as the Acting Administrator for the Office of Workforce Investment and the Director of the Division of Policy, Legislation, and Regulation. In these roles, she provided strategic national leadership and technical assistance to the public workforce system, implemented the Workforce Innovation and Opportunity Act, and coordinated other high-priority policy initiatives.

Tran went on to work at the National Immigration Forum, one of the nation’s leading immigration advocacy organizations. There, she advocated for policies that prepare immigrants in the workforce to reach their full career potential. Kathy graduated from Duke University and earned her Master of Social Work from the University of Michigan. The president of her local PTA, she and her husband Matt live in West Springfield with their four kids. They are avid Washington Nationals fans.

Education Kathy is a mother of four and an officer in her local PTA. As delegate, she will fight to invest in our public school system so that we are able to attract and retain the best teachers and offer robust STEAM academic and extracurricular programs. She will fight for affordable higher education, invest in our community colleges, and work to build strong career pathways from schools to the workforce. A former board member of the Esther Peterson Child Development Center at the U.S. Department of Labor, Kathy understands the critical importance of early childhood education in determining future academic success and will be a strong advocate in the General Assembly for universal pre-K.

Hate is a problem, not a policy, and Kathy will use her voice to stand against those who seek to undermine a welcoming and inclusive Virginia. At a time when the most fundamental elements of a well-functioning democracy are being challenged across the country, Kathy will fight against laws and practices that keep Virginians from exercising their right to vote or seek to weaken our vote through gerrymandering or the influence of big money in politics.

Tran will always work to protect and expand Virginians’ access to quality, affordable health care. Expanding Medicaid in the commonwealth would ensure that 400,000 vulnerable Virginians will no longer have to decide between paying for health care over other essentials, or waiting for a chronic condition to reach an emergency situation before seeking treatment. Further, every year billions of dollars in our federal taxes leave Virginia to support expanded Medicaid programs in other states; it is time for Virginians to also benefit. Tran will oppose any attempt by politicians to interfere in a woman’s right to make decisions about her own body, and will fight against any proposed legislation that would impose medically unnecessary restrictions on reproductive health care providers or limit the ability of a woman to make health decisions with her doctor.

Kathy has spent her entire career working for all Americans to have the skills, training, and credentials to reach their full career potential. During her 12 years of service at the U.S. Department of Labor, she helped shape national workforce development policy and programs. Now, Tran wants to bring that expertise to the House of Delegates to ensure that Virginia is globally competitive and that our region attracts good jobs. She will always fight for workforce and education programs that build strong talent pipelines, and for worker’s rights as critical to economic growth and social mobility.

One of Tran’s proudest accomplishments during her time at the U.S. Department of Labor was her work on the Veterans Opportunity to Work (VOW) Act, bipartisan legislation that helped expand employment services for transitioning service members and veterans. As Delegate, Tran will take leadership in building partnerships with professional licensing boards, employers, industry associations, community colleges and others to make sure veterans are able to translate their intensive, world-class training and work experience to the civilian workforce. She will work to ensure that Virginia fulfills its obligation to our service members and their families, and that our veterans have the tools and opportunities they need to succeed.

For Tran, enacting common-sense gun violence prevention measures means protecting our children and our communities. As delegate, Kathy will fight to keep guns out of the hands of criminals, domestic abusers, and those with severe mental illness. She will push for universal background checks to close the loopholes for sales of firearms at gun shows and over the Internet, and will fight to restore Virginia’s “One-Handgun-a-Month” rule to combat gun-running. Kathy will also fight for an assault weapons ban and limits on high-capacity magazines.

Kathy’s brother David is a Combat Engineer Officer in the U.S. Marine Corps, and completed two tours in Iraq and one in Afghanistan. Kathy and her family are tremendously proud of his service to our country, and it makes supporting veterans and military spouses a personal issue for her. Tran says, “Virginia is among the most veteran friendly states in the nation. As our veteran population continues to grow, we must reaffirm our commitment to our veterans and military spouses and families.”

One of Tran’s proudest accomplishments during her time at the U.S. Department of Labor was her work on the Veterans Opportunity to Work (VOW) Act, bipartisan legislation that helped expand employment services for transitioning service members and veterans. As Delegate, Tran will take leadership in building partnerships with professional licensing boards, employers, industry associations, community colleges and others to make sure veterans are able to translate their intensive, world-class training and work experience to the civilian workforce. 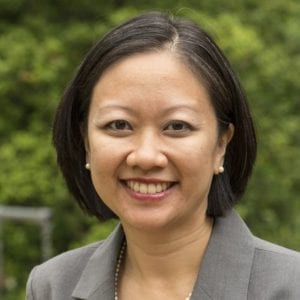 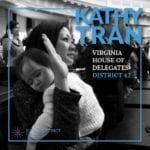