She has served as Clinical Coordinator or Physical Therapy at Southern Virginia Regional Medical Center for over 20 years. Roslyn is a member of the Virginia Physical Therapist Association, organizes the 75th District Gospel Choir, and serves on the Head Start ADvisory Committee and the Smart Beginnings Board of Directors. She has also received numerous awards and recognitions, including the Hard Rock Award from Virginia Education Association and the Grade A Award from the Virginia Chamber of Commerce.

She chairs the House of Delegates Education committee and serves on the Agriculture Chesapeake and National Resources and Appropriations committees.

Delegate Roslyn Tyler has sponsored and voted for various pieces of legislation that will help Virginia families. Recently, she co-sponsored successful legislation (HR 987) which updated agriculture nuisance provisions of Virginia’s Right to Farm Act.  The Act prohibits nuisance lawsuits against farmers by protecting them against false claims of nuisance and unfair judgements.

Recently, Del. Tyler has worked with the Democratic majority to ratify the Equal Rights Amendment.They have also expanded medicaid to hundreds of thousands of residents and raised the state’s minimum wage to $15 per hour.  Thanks to Del. Tyler and her colleagues, Virginia is leading the way in the South for a more progressive future.

Education
A good quality education, regardless of a student’s zip code, has always been one of Roslyn’s priorities. She was the first child in her family to attend a university and earn a degree. Realizing that growing up in an area with limited opportunities, education was the key to living a quality life and earning a decent salary to raise a family, she has served on the state education committee for 10 years. Delegate Tyler currently serves as Chair of the Education Committee in the House of Delegates.

Roslyn will continue to support funding for early childhood education, from pre-k to higher education. She will also work to expand career and technical education opportunities, maintain affordability for higher education and increase teacher salaries.

Jobs and Economic Development
Roslyn supported legislation that would increase the minimum wage to $10 per hour, as well as measures to help women get equal pay for equal work. She also supported the decision to expand funding for Governor Ralph Northam’s Opportunity Fund, which will help to bring new jobs and businesses to Virginia. As Vice Chair of the Broadband Advisory Council, Delegate Tyler led the charge to pass legislation to stimulate the economy by expanding access to broadband internet to rural Virginians, job seekers, and business owners.

Healthcare
Roslyn believes everyone deserves the right to have access to affordable and quality health care. As a healthcare provider, she realizes that some families must make a choice between buying health care insurance and paying their rent or refilling their prescriptions. These are reasons she continues to support affordable healthcare coverage, affordable prescription drugs, assistance for family caregivers, and succeeded in raising wages for CNAs in her District. 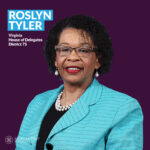