After only 90 minutes, the session was adjourned without taking a single vote. The special session may reconvene, but not until after November 18th. Hundreds of gun rights activists and protesters gathered outside the Capitol in shock.

Gov. Ralph Northam (D) said Republicans had abdicated their duty. “I expected them to do what their constituents elected them to do – discuss issues and take votes,” Northam said in a statement. “An average of three Virginians die each day due to gun violence. That means hundreds of Virginians may die between today and November 18…It is shameful and disappointing that Republicans in the General Assembly refuse to do their jobs.” (Washington Post, 2019)

However, this is far from over, and now it will be up to voters to decide in November. There are 140 legislative seats on the ballot and Democrats have the opportunity to take control of both the House and the Senate for the first time in 20 years.

You can help now by supporting our work to win strategic legislative seats.

Here’s what some of our Virginia Candidates had to say about Gun Reform:

“As a healthcare professional, I see gun violence as an epidemic and a top public health crisis. I support common sense efforts to effectively reduce gun violence. This includes universal background checks whenever firearms are purchased and emergency protective orders that enable family members to temporarily remove firearms from loved ones during a crisis.”

“Leadership means speaking up and confronting difficult problems like gun violence head on in order to keep our Virginia Beach family health and safe. We know there are common sense policies we can enact to address gun violence, and after 150 mass shootings in our country so far this year, we know the results of the continued inaction.”

“In 2017 alone, 346 mass shootings occurred in the US. We can no longer entertain a debate over whether or not guns are the real problem because the truth is obvious. We need a Delegate who will keep weapons from dangerous individuals and keep our schools and public spaces safe.” 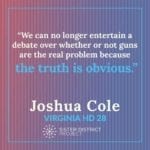 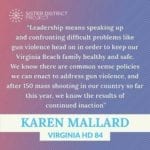 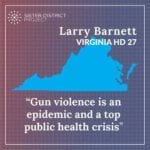